Back a 100 limited edition book of B&W photography from New York! 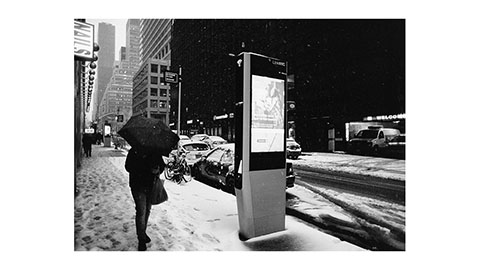 Street photography is an intense, meditative, observational activity, whose text equivalent is the Japanese poetry form, Haiku. Both street photography and Haiku are a borne of immersion in the moment. A classical Haiku has two lines that note an observation, usually from nature and a third that ‘cuts’ that observation, the character of the ‘cutting’ being the essence of the art form.

My practice of street photography attempts the same, a moment, captured, but a second darker, mysterious, meaning that cuts.

New York City must be one of the most photographed places on the planet. It is part of our cultural heritage. However, it is also one one the most diverse, energetic and down-right eccentric places it is possible to see. It’s changing moods and happenings as varied as it’s weather. I have been ‘passing through’ the city from my home in London for the best part of 20 years and over the past 7 years have been aiming to capture some of the feelings that a deep observation of the New York City street affords, both in images and complementary Haikiu.
Brendan Delaney
Visit Website.