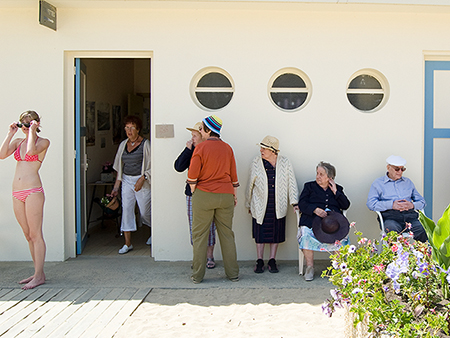 Chris first took pictures in the 70s, mostly in black and white, and mostly developed and printed in her basement flat in the East End. She went on to study graphic repro at London College of Printing, where photography was on the syllabus and continued to enjoy it for a few more years before other interests distracted her. She didn’t pick up her camera again in a serious way for about twenty years.

More recently, Chris took voluntary redundancy from her job producing websites and retrained as a counsellor. She says, “Although I enjoy this immensely, it doesn’t fulfil my creative side in the same way. So I started to go out with a camera again, first photographing people in my local area – and as before, mostly in black and white.”

For this Showcase Chris shares with us a series of pictures she has made at the seaside, and discusses her background and motivations in pursuing her interest in street photography.

LIP: Could you explain what inspires you to photograph people in seaside locations?

CHRIS: I was born in Brighton and wherever I am, whichever country, I always gravitate towards the sea. It therefore seems fitting that one of my ongoing projects should be the seaside. I’m lucky in that it attracts such a transient crowd and there’s no shortage of material.

My seaside pictures aren’t all of England, but what connects them together for me, is that they have a very English feel about them. I think when most people think of the English seaside they naturally think of Martin Parr, but I think more of Tony Ray-Jones or David Hurn, only in colour – these are my influences. However, I’m not trying to emulate them. I try to put my own spin on things, to capture some sense of involvement from my subjects – to make the landscape theirs and theirs alone, even though tomorrow’s population may be different. Sometimes the people I photograph feel like characters in a play only I don’t need to direct them. They seem to know exactly where I want them to be. 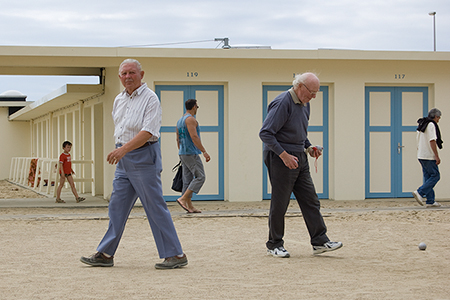 Although these guys were playing petanque, their movements suggested the bad dancers at the school disco. I found them very comical to watch. I like how they’re frozen in mid-step. 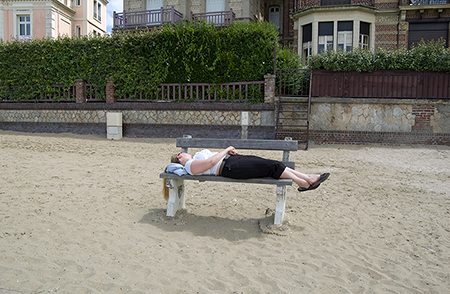 The sheer abandonment of this person’s pose caught my eye. I’m full of envy for someone that can just fall asleep on a bench, with no inhibitions.

LIP: Do you mostly take pictures as an outside observer, or are your subjects aware of your camera?

CHRIS: Initially, I wasn’t so confident and wanted no interaction with my subjects… but at some point this began to feel less satisfactory. I missed the connection. Now I’m getting closer in order to obtain that connection, which I think gives a different feel to the more recent work I’m doing. Alongside this, the gift of a new camera (my first DSLR) which is larger and noisier, more often attracts the attention of whoever I’m shooting. 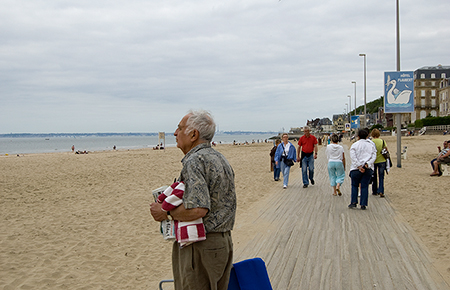 This chap was well prepared for his day on the beach with his chair, towel and newspaper. I imagine him scanning the beach for a likely lady to strike up conversation with.

LIP: How often do you shoot?

CHRIS: I now go out two or three times a week to shoot – between seeing my clients. My camera is always with me. I wander around town, scanning the street for interesting faces. Sometimes I’m so entranced by an expression that I forget to take the photo but it doesn’t seem to matter. I rarely return home disappointed.

LIP: When you photograph people, aside from expressions that you see, can you explain what draws you to certain characters?

CHRIS: With the elderly people I’ve photographed, it was a sense of strength combined with vulnerability. As a bereavement counsellor, I’m always amazed at the strength people find to cope with the situation they find themselves in. I think this can also apply to the aging process. Getting older isn’t always easy – with its associated issues; immobility, ill health, bereavements, thoughts of ones mortality – and in many cases, invisibility.

More generally, I’m drawn to people that can I feel some connection with – or would do if I knew them. There may be something a little quirky or unusual about them (though I can’t always put my finger on what it is)… and as someone that doesn’t easily ‘fit in’ I can identify with that. Of course, these are purely my perceptions as I really have no way of knowing… and in some ways, voicing these thoughts makes me feel uncomfortable as they play to assumptions that I don’t like to have. After all, it’s very possible that I’ve just caught them having a quirky moment. 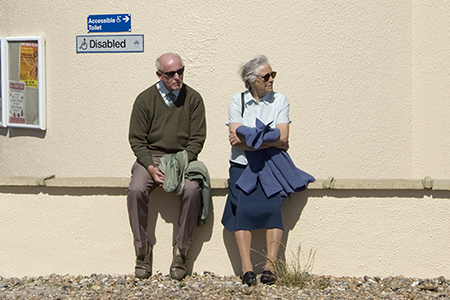 Compared with others that were around on this really hot day, this pair struck me as rather over-dressed and formal for their seaside environment. I think there’s some sense that things are not quite as they seem.

LIP: You mention that in many cases, aging involves issues of invisibility. Your body of work indeed includes a remarkably significant number of images starring aging and elderly people. Do you see your work to be shedding light on their issues and if so, what points do you think you may be trying to communicate with your audience?

CHRIS: I certainly don’t aspire to be a champion of the elderly in terms of the issues they have, however, if as a bi-product of people seeing my photos, it makes people more aware, then I feel that’s a good thing. After all, the population in general is getting older. 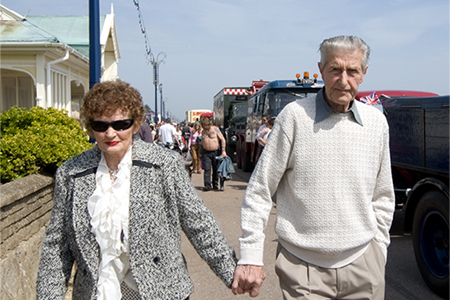 I thought their pose quite interesting, and I liked how he was holding her hand in such a protective way. There’s such a sense of warmth between them.

LIP: Are you setting out to create a body of documentary-style pictures, or do you have any usage in mind for your images before you shoot?

CHRIS: I didn’t set out to create a body of any style at all. If it’s there now it’s something that’s evolved naturally. If you take photos very often over a long period, then I guess certain patterns can start to emerge and you kind of grow into your style. It’s hard for me to see these pictures in a documentary light right now. When I look at photographs I took in the 70s they have a documentary style… but that’s 30 years hence. I think this is something that might become more apparent in say, 30 years time.

As far as whether I have any usage in mind before I shoot; sometimes I do, sometimes I don’t. One project I’m currently shooting for is a book – and I go out specifically to shoot for that… but if something entirely unrelated presents itself, then I can be easily distracted. 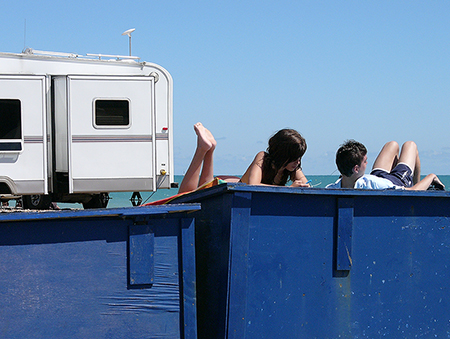 Here, I was drawn to the strange perspective. The motor home is firmly on the ground, as are the blue boxes that the couple are sunbathing on – yet somehow, it all looks wrong. I also thought there was a rather painterly look to the scene.

LIP: Do you find the task of editing, or making selections of your work for different purposes, a difficult one?

CHRIS: In the past I’ve found it pretty difficult because my shots have tended to be more random, with no specific project in mind. Now, I endeavour to work more towards specific projects I’m finding it a lot easier and actually enjoy the process of editing. I do have to step back a bit sometimes as if I keep looking at the same pictures again and again I start to get sick of them. If I have a break I find I can come back to it with a fresh pair of eyes. 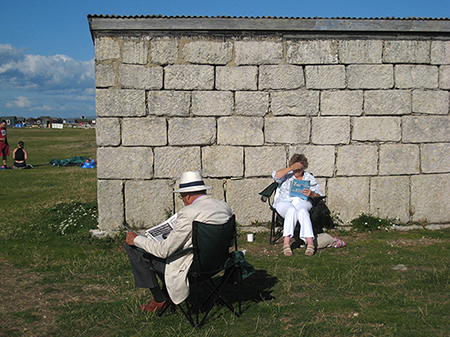 I saw the composition before I saw anything else. I liked the shapes and juxtaposition – and I liked how they look so at home. It feels like their special place, where they’ve been coming for years.

LIP: I see you are a member of a collective of photographers, ZuperQuirk. Could you tell us what your experience collaborating with other photographers is like?

CHRIS: It’s been very exciting for me. I’d got to that stage where I wanted to take things further but I wasn’t sure where to go. Working with others in this way has helped me to start thinking more in themes. It’s interesting that as a group we have certain things in common – in particular, an interest in the quirkier side of life. Yet, we each have our own style… and of course, being from various corners of the globe, our environments are very different. They are all people whose work I admire and in terms of feedback and support it’s invaluable.