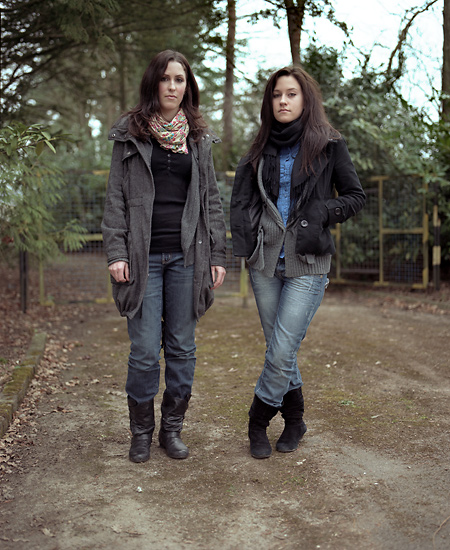 Mark Denton is from Manchester but currently based in Kent. He started photographing at age 13 or 14 and carried on into university. Though he studied politics he spent as much time hanging around with friends doing fine art photography degrees at art college as with his politics classmates. Those friends helped him gain access to a place he enjoyed spending much time in – the college darkroom. Prior to starting his degree he took a year out to work at a photographic gallery and darkroom co-op, where he did a bit of everything from helping to hang exhibitions to teaching a beginners’ black & white darkroom class.

About five years ago after taking an extended break from photography, Mark was inspired by the Cruel and Tender exhibition at Tate Modern. “I was exposed to Eggleston, Boris Mikhailov, Philip-Lorca diCorcia and Rineka Dijkstra and suddenly the world opened up for me photographically speaking.”

Mark’s series ‘Missionaries’ (2008) portrays the young recruits of a fundamentalist evangelical Christian community in Sussex, England. In this project we see images of young people as they undergo six months of intense training and conditioning in a closed environment set very much apart from mainstream society.

Mark is currently studying for an MA in Photography at Thames Valley University in Ealing.

LIP: Which subjects do you have the most interest in photographing?

MARK: I’m really interested in issues of belonging. I’ve always been inherently quite a social, large-group kind of person, and I think there’s actually a personal search for family and community lurking behind a lot of my work.

Linked to this I’ve always been interested in people who exist outside the mainstream, who have carved out a niche and defined themselves as part of a community that is exceptional, that defies expectations. I’m interested in how those people are at once defined in opposition to mainstream living but at the same time are parts of what is often a very structured, ordered and normalising community. They swap one set of rules and conventions for another. Stemming from this I’m interested in questions about how photography – and especially portraiture – conveys meaning and ‘truth’ to a wider audience. 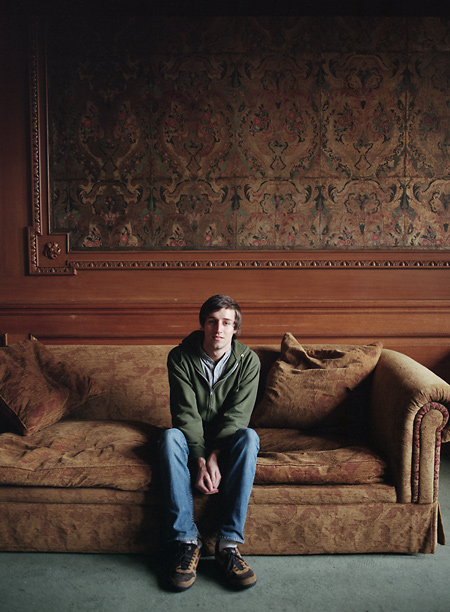 LIP: Could you tell us how your Missionaries project came about?

MARK: It started when I met someone who had been involved with the group many years ago and had, in her words, ‘escaped’. The story of her experiences and time there interested me, but what really fascinated me was her underlying need to belong, to be part of something that offered salvation and an apparently complete model for living. Having heard about this community existing just 40 miles away I just knew I had to get in and photograph it, to try and get to the heart of what it was about.

It’s not a documentary project, though aspects of the work certainly skirt close to that definition. I was very conscious that I was in many ways hovering around the documentary genre but was determined not to allow things to fall into that mode. It’s definitely on the ‘fine-art’ side of the documentary-art continuum, though I think this notion itself is pretty outdated nowadays. The project is almost entirely portrait based, though it also includes some photographed pages from the diaries and the journals of the students. 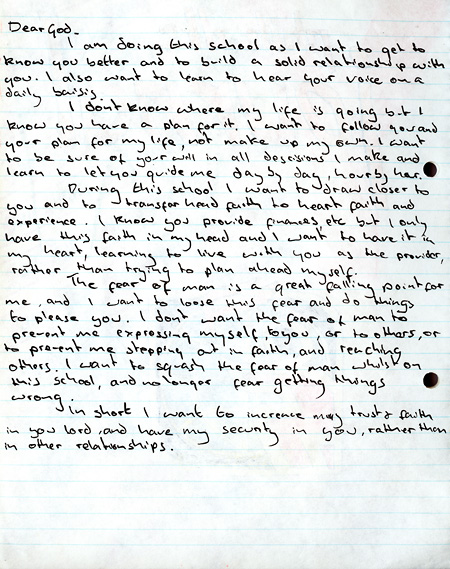 LIP: How did you approach making arrangements with the community to gain access?

MARK: I got in touch with some people involved with the group, and they in turn put me in touch with the leadership at the place in Sussex. It took me three months to negotiate access – I met with various staff and leaders beforehand and had to make a couple of presentations about the project. It was quite a nerve wracking time for me, as the project could have been halted at any point. To be fair, the reaction of the leadership was pretty positive. I think they were as interested as I was in seeing the results. In these kinds of situations, honesty is always the best policy and I simply explained that I would be taking quite formal, studied portraits of the students, and that I wasn’t interested in creeping around with an SLR taking candid or pj-type shots.

LIP: How long did you spend shooting?

MARK: I spent 6 months shooting. I’d generally go there once or twice during the week and at weekends. I followed a group of new students starting out on an intensive 6 month long initialisation and training course. The students came from all over the world, and particularly from USA, Scandinavia, the UK, Holland and Belgium. 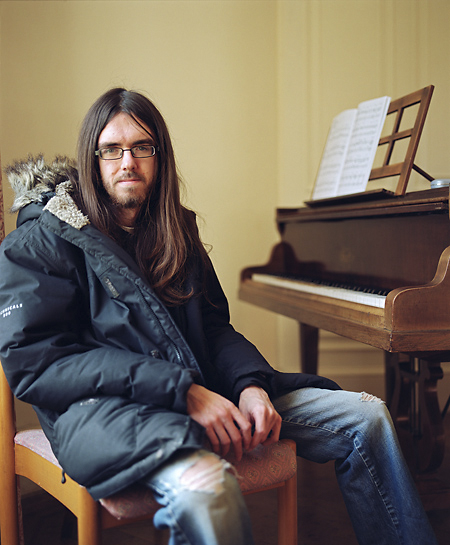 LIP: Why were you so determined to avoid Missionaries becoming a documentary project?

MARK: Although the lines between traditional documentary and fine art practices are becoming increasingly blurred – I’m thinking of photographers like An-My Lê, Simon Norfolk, Luc Delahaye, Alec Soth – I think that the motivation and intention behind each kind of practice remains fundamentally different. Because of its nominal subject matter- religious fundamentalism – it would have been easy for Missionaries to have become a documentary project and I was very conscious that at several points I was skirting close to this, but it was never about documenting the community per se, it was about exploring the ways in which individuals relate to and are shaped by the wider communities of which they are a part, and about how I related to those individuals through the act of photographing them.

A more documentary-based project would have focussed on conveying the life of a closed and quite extreme religious community by including scenes of background life and the daily activities of the members. It might have relied on more spontaneous shots, whereas mine were set up, were very slow and very deliberate. A documentary project would have likely been more focussed on the extraordinary, the sensational, on the spectacular; these things were certainly in evidence and I was (and remain) deeply critical of them, but they were not what I wanted the project to be about. My interest was in the people, and the project is almost entirely portrait based.

LIP: Did the process work out as intended then?

MARK: One of the most interesting things was how its focus changed so drastically during the shooting. I started out from a very critical position – I’m a firm atheist and I was definitely critical in my own mind about what was going on in the community, about how people were being indoctrinated or brainwashed. But as the shooting commenced and as I got to know the students I was mixing with, the project shifted and became less about my opinion and more about their experience of the community and of the relationship between myself as photographer, and them. The photographs became evidence of a moment of shared trust between me and the sitter, and I became acutely conscious that these people were offering something of themselves to me and the camera. I’m drawn to situations and people where this possibility for connection exists. I love the ambivalence, the uncertainties and contradictions that are in some of those images. 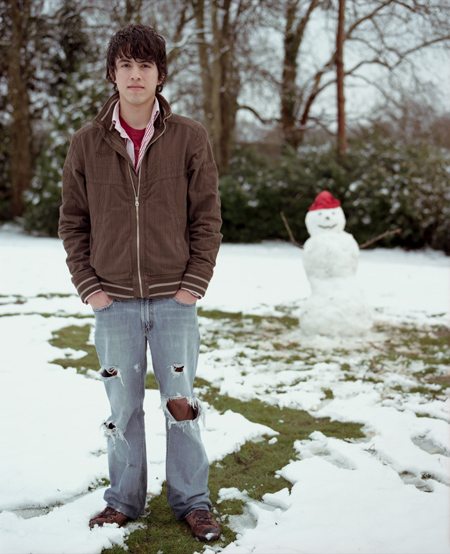 LIP: How would you describe some of the relationships you built with individuals during the Missionaries project? Are you still in contact with any of your subjects?

MARK: The relationship between myself and the people pictured is what lies at the heart of the project. It’s cliché, but It really is all about establishing a condition of mutual trust between you. For the first few visits I went along without a camera just so we could get to know one another away from the presence of the camera. And this helped to establish a relationship later when the students came to have their pictures taken. For many of them, the 20 minutes or so spent each week in front of the camera became a kind of release, a kind of refuge from the pressure they were under the rest of the time. You could see them almost retreating into themselves for a moment, taking time to reconnect with themselves and a kind of stillness descending. They really were under a lot of pressure – psychologically and time-wise – during their training.

I’m in email contact with some of the students, but they have all been dispersed to various corners of the world as soon as their basic 6 months induction was completed. I’d love to find out where they are and maybe make some follow up portraits of them in their new lives. 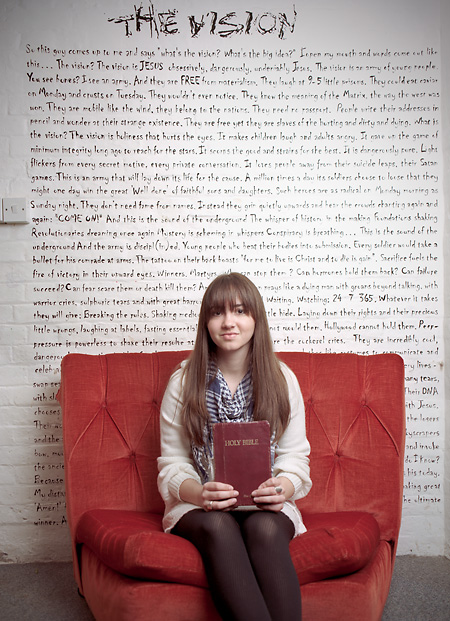 LIP: Do you feel your portraits scratch the surface to reveal anything of their specific personalities, and if so what?

MARK: I can talk about what motivates me to make a particular portrait, and about what I think that portrait is a record of, but I’m wary of making too many claims beyond that about what the image reveals of the sitter’s true nature. After all, as soon as the image is displayed publicly and viewed by others it takes on a life and a meaning of its own, largely regardless of what I as photographer may originally have intended. People bring their own histories and psychologies with them when viewing photographs and these generally have far more impact on how an image is perceived. This ambiguity of meaning – almost a loss of control – bothers some photographers who feel that it weakens the case for photography as a medium of valid personal expression but for me it is one of the key strengths of photography rather than a weakness. 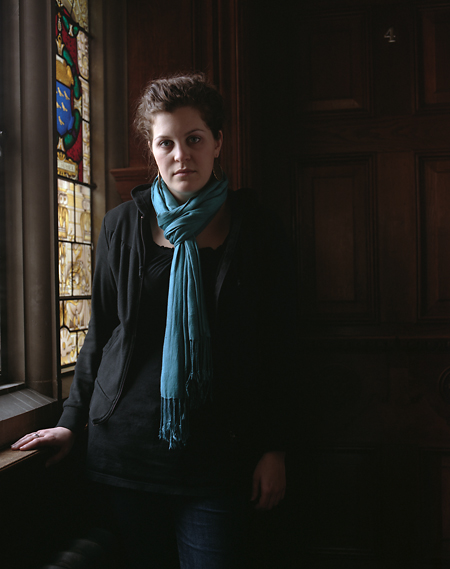 LIP: You have presented individuals in your pictures. Do you see these as clearly depicting their different personas or as parts of a whole that without the others are separate, either literally or metaphorically, of the Mission?

MARK: That’s a good question! The work was intended from the outset to be viewed very much as a series. During shooting I became aware that I was shooting people individually but was starting to depict them in a similar way. They’re shot full length, generally alone, confronting the camera directly. It occurred to me that there was an interesting dynamic going on – I was using photography to try to isolate and emphasise the individual, to liberate the individual – visually at least – from the wider community, only to then place the individuals back into some sort of photographic series. In a sense I was taking individuals out of their literal community (a group of which I was essentially critical) and placing them into a new grouping that exists photographically. I think there is a subconscious desire in there to use photography to investigate, make sense of and even visually recast situations in which I feel individuals are being deluded or manipulated. 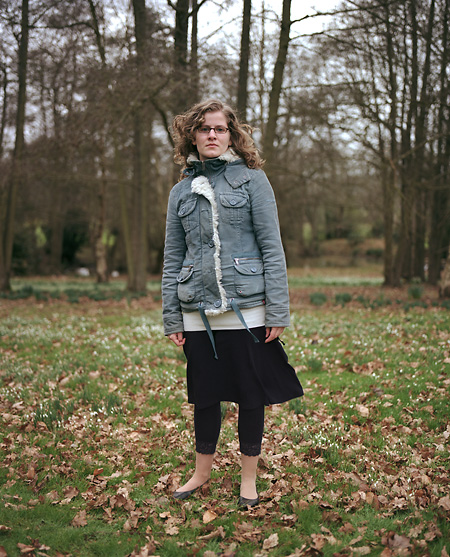 LIP: What are your future plans for Missionaries? Do you see yourself producing a book?

MARK: There will be a self-published book, plus an exhibition of selected prints at the community itself. I’d love for the project to be picked up and exhibited by a gallery as this was always the principal output I had in mind when making the work. If any curators are reading this then hey, let’s talk!