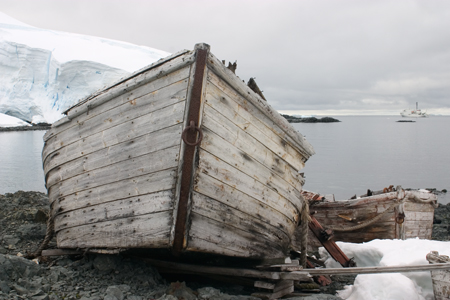 Carole Rawlinson’s photography has developed in parallel with a long career as a hospital planner. It is a mixture of contemporary and documentary work and covers urban and natural landscapes and some archaeology.

After 30 years as a hospital planner, Carole has also completed two major hospital photographic projects between 2002 and 2007 – one of a new hospital being built and the other of a famous old hospital closing down. In 2006, she was awarded a Contemporary ARPS for her book called Transformations about the building of the new Evelina Children’s Hospital at St Thomas’ Hospital. In 2008, she was awarded a Contemporary FRPS for another book called Middlesex Memories about the closure of the Middlesex Hospital on Goodge Street.

Carole has had three solo exhibitions of her hospital projects and has shown work in other exhibitions including LIP annual exhibitions. She is a stock photographer for the Royal Geographical Society and has been a member of LIP and also Hampstead Photography Society for many years.

For this showcase we take a look at Carole’s landscape images from a body of work she calls Wild Places.

“I don’t go out with my camera with the hope of capturing great individual images but tend to take photographs in the context of a project or predetermined idea. My aim is to capture the essence of a destination or tell a story. ” 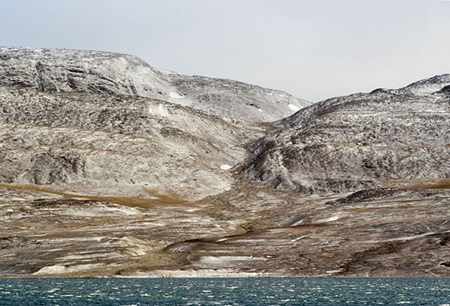 LIP: This series of work is quite different from your hospital documentary projects. What’s your attraction to these landscapes?

CAROLE: I enjoy the solace that comes from being in wild remote places.

When you live and work in busy urban environments and particularly if you’re experiencing major changes in your own life, the emptiness, bleakness, silence and solitude experienced in these wild places can provide a real sense of calm and peace. This is equally true of hot, cold and icy deserts. Remote wild places can also inspire awe and wonder, refresh the mind and body and allow your imagination to soar. As a result, I’ve become something of a polar and desert explorer over the past 10 years and have also developed an interest in the archeology associated with these remote destinations. 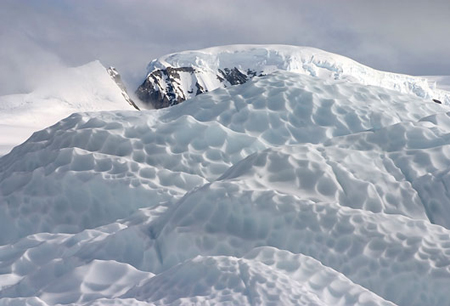 LIP: Wild Places includes photographs from Antarctic Peninsula, Iceland, Norway, Greenland, Arctic Canada and the North West Passage. Could you explain how you came to travel these places and by what means you have done it?

CAROLE: This series of journeys to cold deserts and icy landscapes began with a trip to West Greenland to see the giant icebergs which break off the glacier near Ilullisat and ultimately float across the North Atlantic and down the coasts of Labrador and Newfoundland. I flew to Kangerlusak and then travelled north on the local coastal steamer. After this trip I was hooked on the visual qualities of ice and the peace and solitude of icy locations.

The next trip was another coastal steamer boat trip in winter up the coast of Norway, north of the Arctic Circle, as far as the Lofoten islands where I spent a few days. My main aim on this trip was to experience and attempt to photograph the Northern lights, which I managed to do late one night from the prow of the ship. I’ve since been back to the Lofotens in the spring to photograph the dramatic mountainous landscape and also the dried cod industry.

In Iceland I wanted to experience the sheer drama and variety of the remote landscapes that this country has to offer, from cold deserts to hot springs, giant waterfalls icecaps and yet more icebergs. On this trip I drove all the way round Iceland in a 4 wheel drive.

The Antarctic peninsula I explored from a Russian icebreaker expedition ship travelling across the Drake passage from Ushuaia in Argentina. Ice, icebergs and icy landscapes were the attraction here and the feeling of almost other worldliness from being so far away from anywhere else. There was ample opportunity to go ashore and explore.

I had been interested for some time in the 19th century search for a navigable North West Passage and particularly the failed Franklin expedition of 1845 and the finally successful Amundsen expedition of 1906. So when the opportunity arose to make a trip myself to celebrate the 100th anniversary of Amundsen’s trip I took it. Again I travelled in a Russian icebreaker expedition ship from Resolute, an Inuit community north of the Arctic Circle. We spent a week travelling west to Amundsen Gulf and then did the transit back in the other direction, something still only done by relatively few ships even today. The remote cold desert landscape had a real feeling of emptiness as there is little human habitation there. Signs of those earlier 19th century expeditions were apparent in several locations, evocative reminders of the hazards of those early explorations. The most poignant of these were the graves from Franklin’s expedition on the desolate beach of Beechey island. Remains of the summer tent houses and winter earth houses of the Thule people, ancestors of the Inuit were also apparent in many locations we visited. 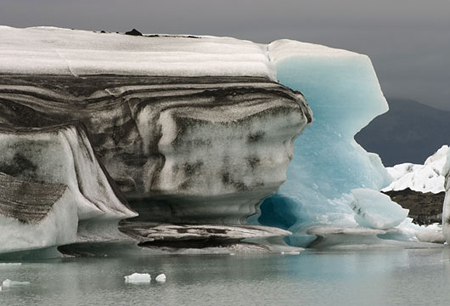 LIP: Resolute has 24 hours of darkness in winter and 24 hours of sunlight during summer. What lighting conditions did you encounter?

CAROLE: I went through the NW Passage in late August so it was light for most of the time but not for a full 24 hours. I haven’t been in either the Arctic or Antarctic when it has been mostly dark.

LIP: What is it like traveling on an icebreaker ship, is it rough-going and what are the nights like?

CAROLE: These icebreaker ships are comfortable but not luxurious. The conditions can be very wild with strong gale force winds whipping up very heavy seas, especially crossing the Drake Passage to the Antarctic peninsula. We also had storm force conditions at times in the NW Passage. In extreme conditions, parts of the ship’s exterior were closed off to prevent passengers from going outside and slipping or being blown overboard. 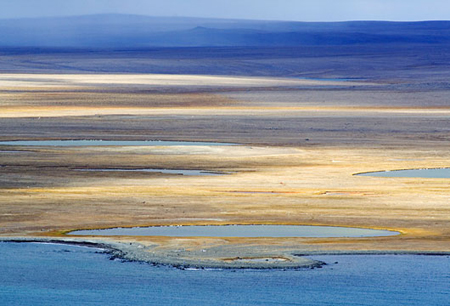 LIP: Travelling these areas is quite a rare thing to do, could you tell us anything about people you met along the way, or were your experiences very solitary?

CAROLE: Because of the remoteness of these places and lack of habitation, most of the people that I met were fellow passengers or crew on board ship. Apart from them I also met some Inuit in the two Inuit communities I visited in the NW Passage and scientists at a research base in the Antarctic peninsula. 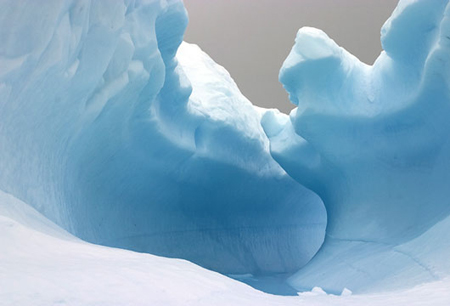 LIP: What sort of equipment were you using to keep warm and comfortable enough to make pictures in such cold climate?

CAROLE: Lots of layers of clothing and several pairs of gloves. I kept some gloves on to take photos and kept my camera in an insulated and waterproof bag so that it didn’t seize up or get wet when I was travelling or going ashore in small zodiac boats. 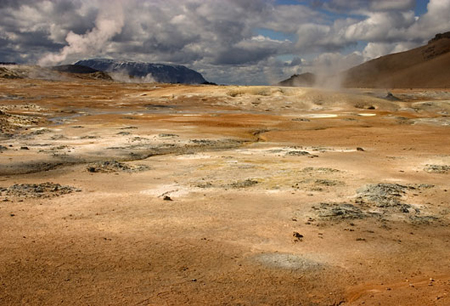 LIP: It seems you have traveled extensively in much warmer places, such as Namibia and Jordan. What were some of your experiences like in these places?

CAROLE: I have made two trips to Arizona and Utah drawn by the drama of the desert landscapes and also by the extensive archeological remains of the ancient Anasasi people – ancestors of the Pueblo Indians.

Apart from photographing the wide variety of hot desert landscapes, my trip to Namibia in 1998 marked the start of what became a 10 year project photographing routes around the world in icy, desert and wild locations. This project used these particular landscapes to express the feelings of loss and the search for new directions that follows multiple bereavements.

In Jordan, I wanted to see the desert landscapes like Wadi Rum made famous by Lawrence of Arabia and the Arab revolt. Camping in the desert one night, I had the memorable experience of watching desert foxes playing close by.

In Libya this year, I focused primarily on photographing the extensive archeological remains of the Roman cities of Leptis Magna and Sabratha.

LIP: What do you think the archeology of our roads, or routes, will tell about our cultures in future?

CAROLE: I don’t know how to answer this question – you’d have to ask an archeologist! In addition to my wild places images, I have photographed routes as a metaphor for expressing feelings and emotions. 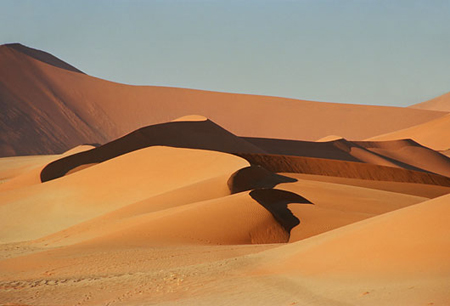 LIP: What challenges do you face when photographing ice and sand?

CAROLE: Challenges in icy landscapes are keeping your camera dry and sheltered from the cold, taking several camera batteries as they don’t last as long in the cold, holding your camera still in howling gales or whilst standing up in a moving zodiac and reacting quickly to dramatic changes in the weather.

Challenges in desert landscapes are mainly keeping dust out of your camera.

LIP: Are you currently working on any new projects?

CAROLE: I have recently self-published a book via the blurb.com bookstore on my Routes project which can be found here.