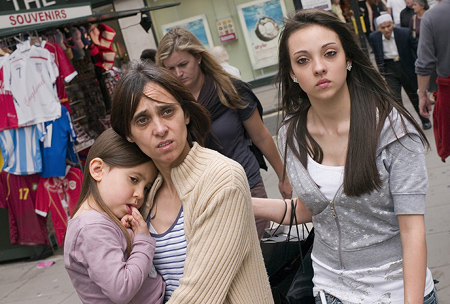 David Brownridge was born in Scotland in 1957 and studied photography in Glasgow before moving to London in 1978. He currently works as a freelance picture researcher mainly in the areas of current affairs, art and science. With 25 years of experience he’s worked for many newspapers, magazines and publishers and regularly with The Economist and Nature magazines.

David’s personal photography is now primarily done in the streets of London, but his interests have been varied, including an earlier black & white project entitled “Familiar Cows“. Prints from that series are in the collections of London’s Victoria and Albert Museum and the Scottish National Galleries in Edinburgh.

Here David discusses his extensive ongoing project “Walk on By“. 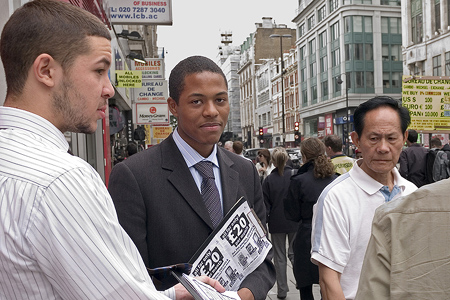 LIP: Could you explain where you like to photograph for this series and what draws you to shoot in the street?

DAVID: Well what draws me to shoot in the street is obviously people and the London streets are teeming with the whole world. The sheer mass of people and pace of movement makes this type of photography relatively easy. I think it would be much more difficult to do this in a provincial town or even in the outer London areas. I did a little bit of work in Barking and that was difficult. Even Camden town is different from the West End. Oxford Street is irresistible but I try to move around the smaller streets of Soho, Mayfair and sometimes the City. Narrower streets create light problems. I like Regent street for its wide open light.

LIP: Do you feel this is a confrontational method, photographing strangers at such close range?

DAVID: I don’t think it’s too confrontational. I never stop for a picture. I just snap and keep moving. I’m gone before people realise – mostly. But I can’t deny a certain degree of intrusion and the possibility of confrontation. 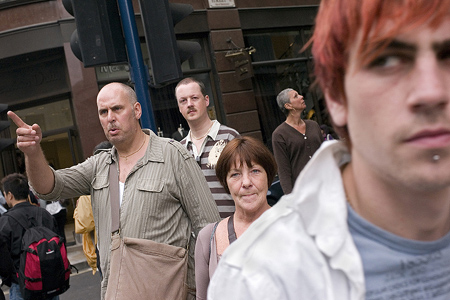 LIP: In some of your other work, in particular your “Things” series on your website, you seem to spend time meditating on aspects of composition. What happens when you photograph moving people, which certainly requires a very different approach? How do you make adjustments to photograph in these circumstances?

DAVID: That makes this work a real mental challenge. I still hesitate too often. I’m trying to practice just letting go of all inhibition and “be there” and get the picture (or a picture). Concentration and mental focus is very important and very difficult. Ideally I’d be totally “there” with a strong picture filling the whole frame but given the speed of movement it very rarely happens like that.

LIP: As you move so quickly, how does the composition form? Is a stronger composition in this case something you recognise only later or can you prepare for it?

DAVID: There is never time for composition or even focusing. I prefocus and judge distance then just point, shoot and hope for the best. It’s totally the opposite of what I’ve been used to doing with careful composition. Getting an interesting picture is so much a matter of chance. I think that’s what makes it exciting for me to do. There is a huge wastage rate. I delete about 90% immediately. Composition is done on the computer afterward. I eliminate the extraneous detail around the edges of the frame but it’s always a difficult decision. It’s tempting sometimes to crop too much but that often leads to a picture that’s just too neat.

I’ve learned to give the image a bit of space. A sense of context and atmosphere is very important even if means the edge of the frame is a bit messy. I’m getting to like the mess. Come to think of it it’s often not just the edges that are messy but the middle of the frame too where there is just so much going on it can look a bit confusing. I’m trying to allow the mess to just be there. After all that is what the real experience is. If the street is messy and noisy why should the pictures be anything else? 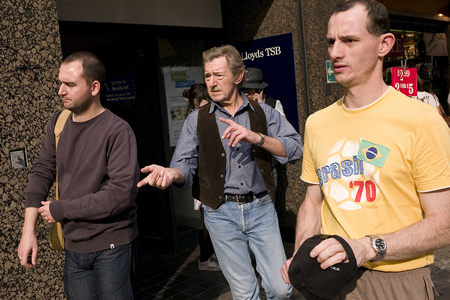 LIP: Regarding the messy and noisy circumstances – your “Things” pictures often show elements of interference as well. Do you want your pictures to show the chaos or do you think your successful images show peaceful moments within those scenes?

DAVID: Ultimately there is no such thing as chaos and peaceful. Hopefully the image will suggest to the viewer a way of seeing which dispenses with those concepts and judgements. We can enjoy the visual world more if we don’t fall into these traps. There is a freedom to be gained here and that’s more important than peace.

As much as we like to make it so the world isn’t ordered for the convenience of our sensibilities and value judgements. This is as true of the visual world as any other aspect of life. It’s important for me as a photographer to try to accept what’s there and leave it alone. How to do this and, at the same time, make an image which has some weight and power is the biggest challenge. I could say it is THE challenge for me as a photographer. It’s also, of course, a challenge for the viewer. I hate the kind of criticism that says it would be better if that detail wasn’t there or if you were a bit more to the left or a bit this or a bit that. It is what it is. It either touches you or it doesn’t. My instinct is to include as much as possible. I think we get a more authentic view that way. I remember watching a TV film about the photographer Fay Godwin. She was standing in a field somewhere photographing a landscape. She was about to take the picture and a car appeared in the frame. She said “let’s just wait for the car to pass” and I’m thinking No No No get the car in. 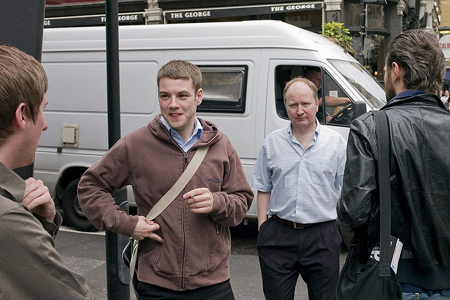 LIP: Situations obviously aren’t always as they appear, and often in “Walk on By” I see pairings or groups and wonder which people are together and who are strangers to each other. This I think is an integral aspect of your work compared to that of other street photographers. Is there a point to this?

DAVID: I think it is amusing how we look at a photograph and treat it as a sort of story. But it’s a story which exists entirely in our heads. The busy street creates a kind of cold intimacy between people which a picture fixes into something we assume is a relationship which in reality just isn’t true. It always amazes me how even very experienced photographers do this. We should know more than most how deceiving a picture can be. This goes back to what I was saying earlier – we should be able to enjoy the visual world without interpretation and narrative making. 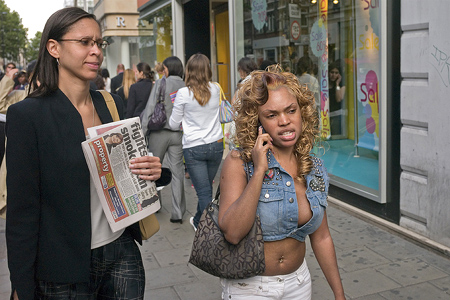 LIP: Would you say you are sympathetic to your subjects?

DAVID: The process of shooting can be a bit aggressive I suppose and intrusive but my intention is generous and entirely positive. That doesn’t mean flattering people or being sentimental in any way. The city is often seen as cold and alienating but the sheer mass of humanity means that the possibilities of creative communication, relationship and intimacy is immense. Although I have no particular intention to express a point of view or opinion I can’t help my own sensibility coming through. I am certainly very sympathetic to my subjects. I feel a great warmth towards the people in my pictures. Perhaps when people are brought together in a picture that cold intimacy gets warmed up in a way. Well, I think that happens in my work anyway even when people look aggressive the eye contact is very human.

Just thinking about it you’ve made a very interesting observation about pairings and groups because even my earlier work, the landscapes in Scotland, are largely about comparisons between different forms and that’s what’s happening again with the “Walk On By” pictures. The eye moves around comparing one face with another so perhaps there is more continuity here than I thought. 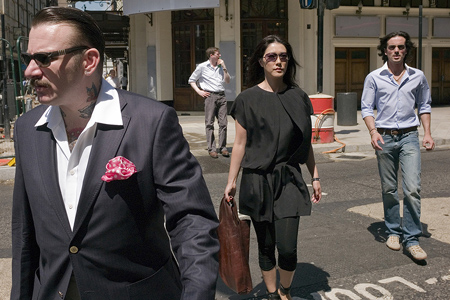 LIP: Well in a way these pictures could be the ultimate ‘Urban Landscape’ images. The crowds of heads are like rolling hills, and individuals possibly like lone trees. Maybe that’s a stretch, but the city really is such an organic environment. What do you think?

DAVID: Hmm, yes I like that idea. Every picture is like a little world in it’s own right and is therefore a kind of landscape. The street is certainly organic and buzzing with life. Trudging along when you’re doing the shopping the street can feel boring and oppressive but if we allow ourselves to look closely it is endlessly engaging and fascinating to see and be part of the flow. 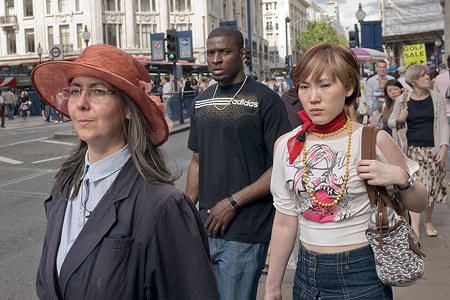 LIP: Do you have any finish line in mind for this project, or is shooting this something of a way of life for you? What’s motivating you to keep up with it?

DAVID: I don’t think I ever ‘finish’ anything I just seem to come to a stop and then eventually move on, usually with a vague intention of going back and getting it “right”. But the intention never turns to reality. We can never go back, really. I don’t think I’m ready to move on from the “Walk On By” pictures yet. I think there is a great deal more pushing of myself to do. It’s partly about exploring my ideas about what makes a ‘good’ picture but also about the mental challenge that I mentioned earlier. I said at the beginning that this sort of work is relatively easy in central London but there is still a considerable degree of fear, hesitation and reserve which I feel still has to be overcome in order to capture the ‘dance’ of the street. I’m a very shy person really and this type of work is something that only a couple of years ago I couldn’t have imagined doing. But something happened and I’m going with it.