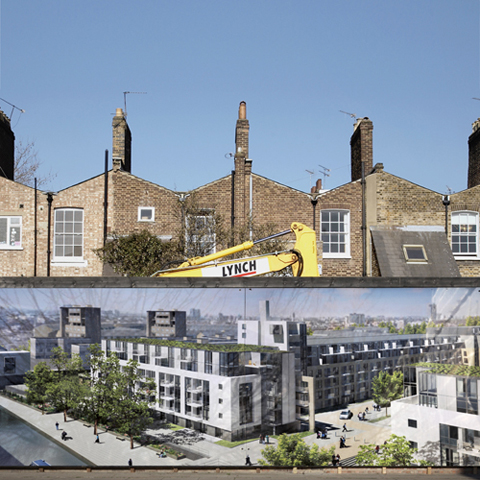 At the age of 16 Mike left Edinburgh to visit London and was so taken by the city he hasn’t managed to move home yet. That was 16 years ago. Having been influenced at a young age by technical drawing he started a career in cartography, but his developing passion for visual communication evolved into taking his dad’s old camera to gigs and now a career as a photographer. Mike returned to university in his late 20’s to complete a BA Photography from University of East London with first class honours and has since been accumulating awards and extending the reach of his work internationally. In May 2009 he won best Fine Art Single Image at the New York Photo Festival. Last year he was a BJP Project Assistance Award nominee and his photographs have also been recognised in the 2008 AOP Assistant Awards (Merit winner, Interiors & Architecture category) and the 2007 AOP Red Dot competition, amongst others.

The images accompanying the following interview are from Mike’s project entitled Ad-Site. He says:

“The catalyst for my Ad-Site project was the increase in new construction works taking place in London. Walk past one of these building sites and you’ll be greeted with artists’ impressions of modern utopias, which promise an elevated social existence by living, working, or even just visiting one of these locations. But there’s a radical distinction between utopian vision and the social reality which attends the upheavals of regeneration – and which remains out of public view. I wanted to deconstruct these projections of pristine living and suggest towards the unseen on the social infrastructure that gentrification entails.”

LIP: You just won the award for best Fine Art Single Image at the New York Photo Festival. What does that recognition mean to you personally?

MIKE: It’s a massive sense of relief to be recognised on your personal work by such influential people in the industry. In some ways it feels like all the hard work is starting to pay off and obviously the exposure gained through the award has so far been fantastic, this all helps in raising the profile of your work.

LIP: Were you in New York for the awards?

MIKE: I wasn’t over there for it, I knew a few days before that I had been nominated and I was tempted to go but I’m not really into the whole awards ceremony thing. However I am really looking forward to going over next year where the work will be exhibited as part of the 2010 NYPH festival.

LIP: In your opinion what qualities make for an outstanding fine art image?

MIKE: For me a fine art photograph must contain a specific aesthetical presence, it needs to come from an idea that is considered and a concept that’s developed into a final image or a series of images that contain both a graphic form and elements of beauty. 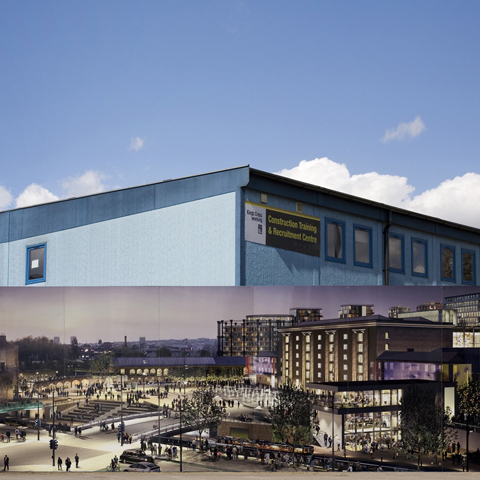 LIP: Do you feel your background in cartography has affected your perspective and aesthetics as a photographer? How?

MIKE: Without a doubt, I spend quite a lot of time just observing what’s in front of me before taking a shot and that’s probably down to the surveying. When shooting landscapes I try to visualise how the contours on a map would look and how this can be captured in a photograph. I’m obsessed by geometric forms and I hope that’s prevalent in most of my work.

LIP: In your Ad-Site series, you photograph the contrast between an idealised picture of lifestyle and community and the reality that exists beyond that visually. What instincts attracted you to photograph these scenes? Is it mainly an aesthetic attraction for you, or do you have strong opinions about gentrification and the sociological impact of urban development?

MIKE: Initially it was purely aesthetical, I’d seen a few of these hoarding sites around town and started to be fascinated by the idea of developers using projected images of utopian living and through developing the project it became more of a social study for me. 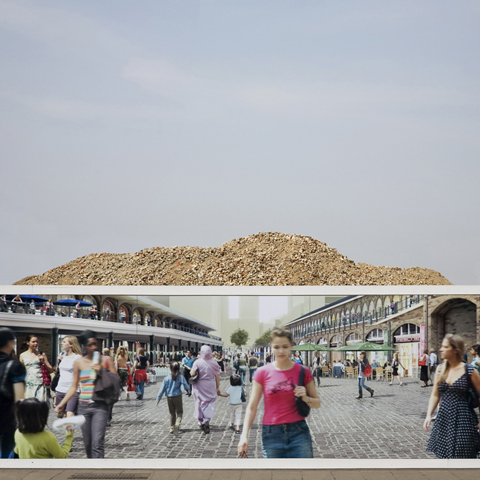 LIP: What methods do you use to make such a project – from the time you have an idea through to planning and actually making the images – is there a routine you keep to?

MIKE: Most of my ideas tend to come out of just seeing things whilst I’m out and about, I normally do a quick test shoot to see if there’s something interesting there then spend a bit of time researching ideas and developing a concept. It’s during this stage that I start to really understand what it is that I’m trying to say with a photo project and then I’ll spend around 3 or 4 months on planning, out on reconnaissance (assessing the environment for things like permits, traffic, sun path, etcetera), shooting, editing and retouching. This has been the way my last few projects have gone and it seems to work well for me. I like to have a bit of time in the initial stages just considering the final intended outcome, there’s no point in spending all that time and money on a project that is mediocre.

LIP: What does that process involve for you, considering the final outcome?

MIKE: It depends on the scale of the project. If it’s a longer term project then I’d be looking into exhibiting the work so I’ll make contact with galleries and curators. If it’s a smaller project I’ll consider the type of editorial I want it to be published in. I also keep an eye on any major upcoming competitions as it’s a great way to get your work seen. I often find myself speeding up the complete process to meet deadlines.

LIP: What form do you think is the optimal way to display your final images – in exhibitions or books, or some other form?

MIKE: I think my work is best suited to the traditional white walls in galleries. I am putting together a book at the moment, it’s in the very early stages and the more I look into it the more I realise just how much work is involved, but it’s something I need to do. 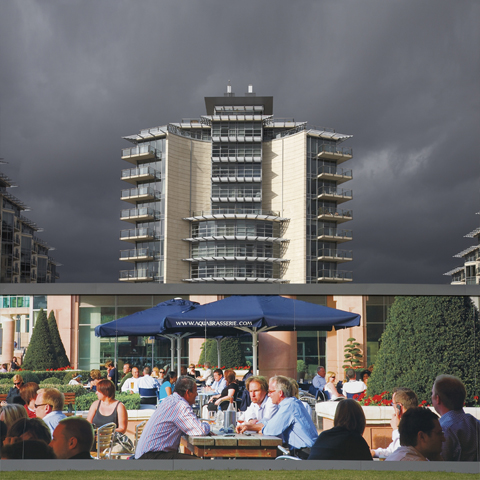 LIP: What are the most valuable skills or lessons that you took away from doing your BA?

MIKE: The course was a bit of a mixed outcome in that it was the first of its kind at UEL. There wasn’t too much structured learning and facilities were lean, however we had some amazing teachers over the 3 years and the library was one of the best around so I spent a lot of my time just researching and developing my theory skills. I guess as a mature student I got exactly what I wanted out of the course. I also realised early on that once I had graduated I wouldn’t walk out and become a photographer overnight so I started assisting as early as I could to learn about the industry on a commercial level.

LIP: Aside from your personal work are you taking on commissions, and what is it like separating the two ways of working?

MIKE: I’m getting some interest from a few architectural clients and I’ve just finished a job for a hotel chain shooting a site in Beijing that will hopefully be extended to more hotels in other countries. There’s also a few part-commissioned projects that are being finalised now that I’m very excited about. I’m precious about my work regardless of whether its personal or commissioned, however I do enjoy the complete creative control I have when working on my own projects but I imagine it’s like that for most photographers.

LIP: Do you enjoy travelling with your camera?

MIKE: It really depends. I don’t travel around London with a camera in my bag but that’s because I don’t rely on the incidentals of photography. However if I’m going away from London then I’ll always have at least one camera with me. I’d rather run out of clothes to wear than not have enough film in my bag. 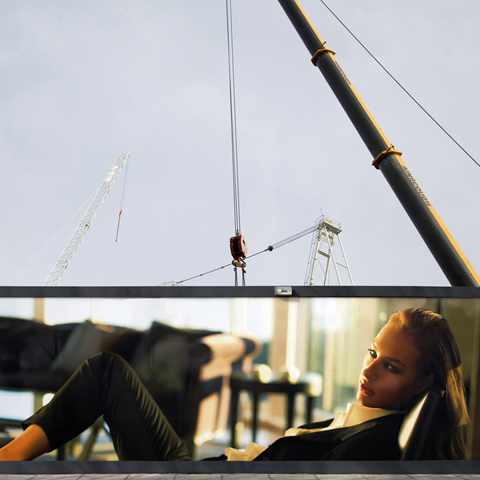 LIP: Have you noticed much change your style and approach the more projects that you complete?

MIKE: It’s becoming more developed with each new project. I’ve realised you need to keep pushing yourself and your technique otherwise your work becomes stagnant and laborious to produce. Working in the industry you get exposed to several styles and its one of the most difficult things to find is your own unique style that you are actually happy with and that isn’t heavily influenced by the people around you. One of the best compliments I’ve ever received was when somebody told me they had seen my work in a magazine and knew it was mine just by the style.

LIP: What’s the ‘Fresh Faced and Wild Eyed’ group exhibition at PG that you’re involved in this month (June 2009)?

MIKE: It’s a competition that the Photographers Gallery run for recent graduates to showcase their work. I was lucky enough to be selected as a finalist.