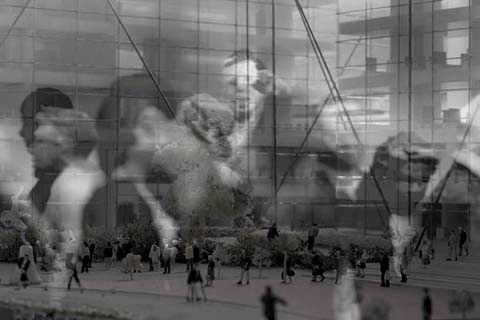 Nicholas Cobb’s photography captures the humorous and humdrum events of our everyday lives as city dwellers. Many of his images are made first by creating elaborate set models populated with figurines, then photographing his own manipulated narratives. For some of his series he has bent and moulded plastic bottles, card and general waste, but whatever material he uses, the outcome is a collection of scenes that we can all relate to.

Coming from a background of art school and twenty years of abstract painting, Nicholas abandoned the canvas and picked up a camera to capture the life he imbues in his models. This abrupt change in artistic approach came about seven years ago as he began exploring all that was opposite to what he had done in the past. His interests in sculpture, model-making, the narrative and photography all came together in previous projects such as Ovid’s Metamorphosis, and Life of Christ.

In November 2003 Nicholas bought a simple digital compact camera that allowed him control over aperture and shutter speed, and over the next few months concentrated on honing his photographic knowledge whilst documenting a local allotment over many dawns and dusks. He now teaches photography to beginners part time and is continuing with new projects.

For this showcase we take a look at images from his series The Office Park as well as some from previous projects that show the breadth of his imagination for scene and structure through model creation. 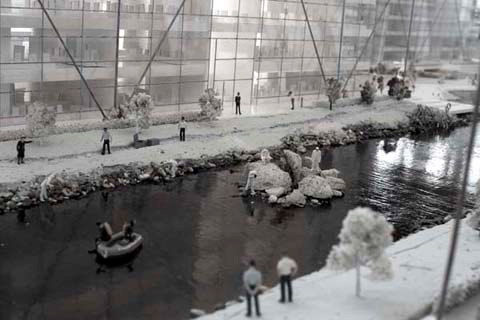 LIP: The Office Park is much darker than your earlier work and is open to far more interpretations. Would you agree to this statement and what are you hoping to communicate to the viewer with this project?

NICHOLAS: Yes, I was after something a little more unsettling. Various ideas came together and by the end of the summer in 2008 I started making an elaborate model of a business park. That summer I had read several of J.G. Ballard’s novels including ‘Super Cannes’, which is about disturbing behaviour amongst the inhabitants of a gated community isolated from the world. Whilst walking along the arterial routes out of west London I had ‘discovered’ a nearly completed office park development. The idyllic setting combined with the ever-present ‘security’ got under my skin and left me wondering about a dystopian outcome for this kind of world.

I was aware of the problems photographers have trying to photograph in certain locations. Parts of our cities are sold off to developers who create work, living, shopping and recreation facilities that appear public but are in fact private, with all sorts of rules enforced by security guards. Does one feel safer in these environments or more likely to be paranoid about how dangerous it is outside of their ‘protected’ boundaries?

So the series has at its centre a dark artificial lake which appears to have the opposite effect on some of those that gaze into it than that intended by the landscape artist. Some employees come and go happily enough in the resulting images but others seem to be engaged in extracurricular activities of a more malevolent nature. 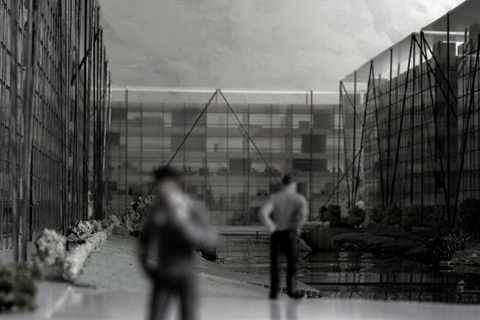 LIP: Previously you have worked with junk based characters and backdrops, but for The Office Park you’ve used ready-made human models, created a sophisticated set, made great use of differential focus and there is a complete change of colour palette. What was the inspiration for this change in approach?

NICHOLAS: I don’t work to commission or worry about funding for projects. I get by teaching. This means that I can go where I want with ideas. So I set myself the challenge of making architectural models out of the materials that such model-makers use, including readymade trees and figures. I knew that I could help make the images appear believable by using a shallow depth of field, generally throwing much of the buildings out of focus. Even the main subject could be out of focus as many of these photographs were meant to have the edgy look of surveillance about them. I wanted to explore how very realistic looking images worked on the viewer. The photographs are virtually black and white, evoking ideas like the past, memory, the things in one’s head. 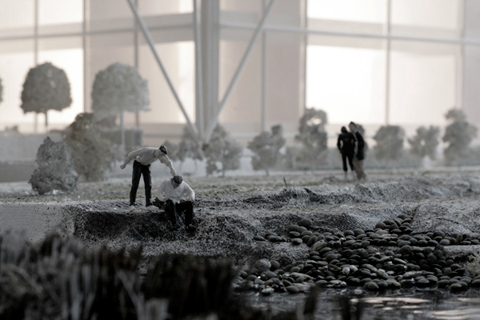 NICHOLAS: The digital darkroom, like the digital camera, made it possible for me to see that I could make work photographically. All this could be done without digital though. I try to get it right in the camera! So, I use Photoshop sparingly, simple double exposures, for instance. The prints are not quite black and white, I was after a tint, a draining of colour, that Photoshop makes easy to apply. 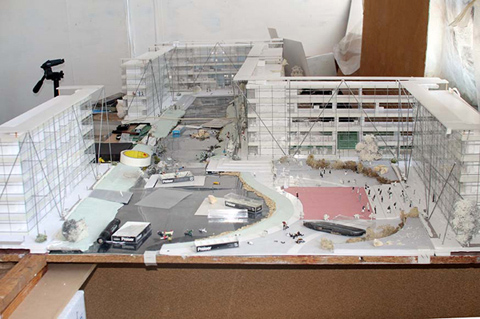 LIP: Making models and photographing them seems to be your medium of choice. What inspired you to see characters in recyclable plastic drink containers and other waste? Is recycling an important part of your work?

NICHOLAS: One thing in particular that caught my eye on the allotment was the use of drink containers as ‘scarecrows’. They were beautiful translucent objects to photograph.

Later, when I wanted to make an image of the Virgin Mary, I realized that all I had to do was slit the throat, as it were, of a blue capped, two pint milk bottle, tilt that ‘head’ back, set it in a window and photograph it.

As far as recycling is concerned my curiosity led me to research obscure texts such as Michael Thompson’s ‘Theory of Rubbish’. So, although I’m a dutiful recycler, that’s not the message. I’m drawn to the way that a creative intervention can take place along the route of commodities to trash – for instance, Picasso made a bull’s head sculpture out of a bicycle seat and handlebars. 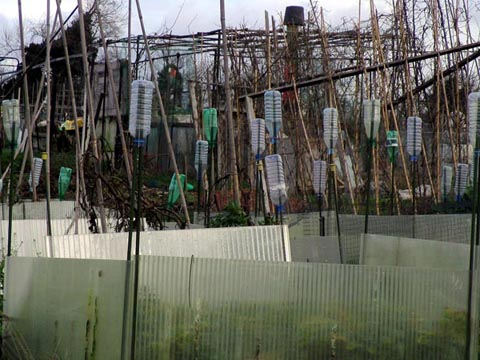 LIP: So, is the photograph itself the actual artwork or is it merely a documentation of your models?

NICHOLAS: From the start I wanted the final work to be not only photography but a book of photographs with a narrative implied. 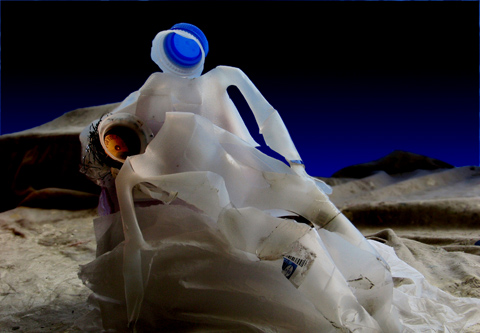 LIP: How long does it take you to make your models and photograph them?

NICHOLAS: The figures were purposely made from material that I could quickly shape into believable poses. The backdrops vary considerably. Some sets are of a single shop front and take a day or two to make. Others are long sections of a street or business park and take a month or more to make. These can cover an area eight feet square providing many viewpoints. Like a tableau vivant, ‘figures’ are carefully arranged, lit, photographed, rearranged, swapped and photographed again until it works. 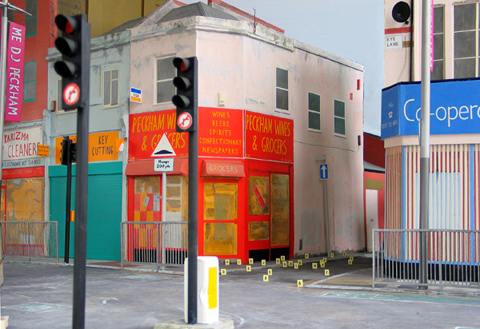 LIP: Did you use street photography as a starting point for the ‘Walking Down Rye Lane’ series?

NICHOLAS: Yes, I was certainly discovering all the great names of the genre as I developed that work. But I was also looking at the work of Jeff Wall, Gregory Crewdson, Thomas Demand and others. If you mean do I take street photographs and recreate them in model form then the answer is very rarely. On occasion I have thought it could work if I created a scene based on a particular photograph, my own or another, or painting. That’s more like a starting point and the end result can look quite different. I’ve lived near Rye Lane for over twenty years. Having made many of the images I did finally go down the street taking pictures and was very pleased with the result. But the whole secrecy, permission and intrusion issue on inner city streets left me feeling that I had found a novel approach to the genre by ‘staging’ it with models and I should stick to that. 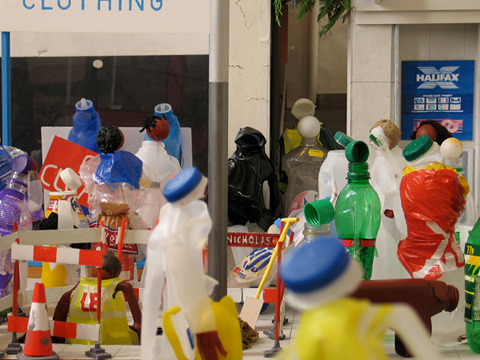 LIP: Would you say that studying street photography helps you to create such engaging moments, injects such a sense of life, humour and activity into the world of the models you create and photograph?

NICHOLAS: Although it’s true that I’m mimicking street photography, and humour is invoked, I’m also paying homage to it. Along with urban landscapes it’s what I want to do when out of the studio. The ‘In-Public’ street photography website has many examples of humour found in everyday juxtapositions but I wanted to find it in the very material of the models. The viewer is engaged in a constant toing and froing between recognizing an all too familiar human gesture and the fact that it’s made from an all to familiar bit of junk.

I use all the ‘errors’ that can occur in real life – who’s in focus and who’s walking in or out of the frame? For some shots I would create a shoot from the hip look, others are more in your face. It’s generally a case of creating in the moment, fixing a gesture as one sculpted figure interacts with another – a greeting for instance – and you react to what’s in front of you. Over the years I’ve built up a store of memorable scenes that I’ve witnessed and I used them. It’s a soup of memories, media images and imagination. 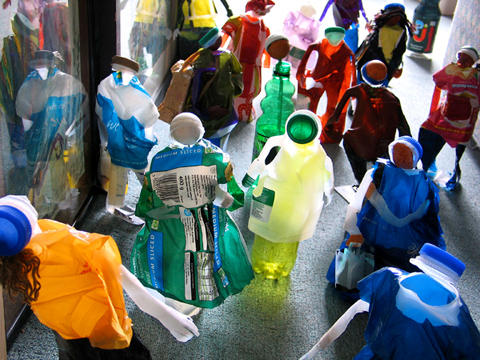 LIP: What do you do with the models once you’ve captured what you need in a group of photographs?

NICHOLAS: The models get broken up, thrown away or useful bits saved. I’ve nowhere to store them even if I wanted to.

When I embarked on the ‘Walking Down Rye Lane’ series I wanted as much of the model making as possible to be made out of discarded material. There’s an ongoing tension with the materials: paper and digital reference images, detritus ‘rescued’, sculpted, ‘documented’ digitally, sculpture destroyed and returned to trash status – the irony of sculpture’s expectation of permanence – and finally, the paper print. The photograph, the frozen moment, a moment that has passed… the relationship with time, all these things are of great interest to me.

LIP: You’ve recently had two exhibitions of your Rye Lane work. Any plans for a show of your Office Park work in the pipeline?

NICHOLAS: I plan to have some of them featured in a proposed group show at the Viewfinder gallery in Greenwich next summer.

The Office Park book is available at blurb as well as a number of other books.