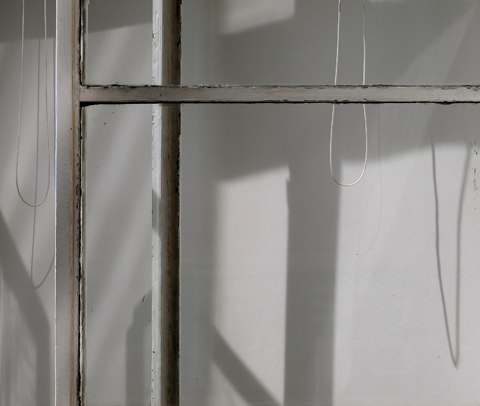 Originally from Vienna, Austria, Krystina moved via Paris to London in the 70s and has lived in London ever since. After completing a sociology degree in the School of African and Asian Studies at the University of Sussex in the mid-70s she had a long career in the voluntary sector. In the early 90s, she studied Fine Art and Photography at Camberwell School of Art in South London, and returned to work in an urban regeneration project before taking early retirement in 2006. Since then she has pursued her passion in photography, shooting in both colour and black and white. Her self-published book Urban Parallels (2008) is available on Blurb.

For this interview we discussed Krystina’s series entitled In Between.

She says, “A quote from Gary Winogrand has lodged itself indelibly in my consciousness: “There is nothing as mysterious as a fact clearly described”. It is this seemingly contradictory combination of mystery and fact that keeps me searching from the corners of my eyes zooming in and out on physical forms and the spaces between them.”

Though her photographs may appear as documents of urban fragments, Krystina says they are not really ‘about’ those specific things. “It doesn’t much matter to me which particular objects or features I am depicting. I am far more interested in the relationships they have to each other across the spaces in between and how light, surfaces and forms intersect with my own psyche and cultural baggage.”

“I enjoy working with complex layers, incongruous or contradictory juxtapositions and constant changes in appearances. When making an image, I try to discover an underlying geometry within the picture plane and to reveal some harmonising unity or wholeness. Hopefully it is a unity that allows the diverse spatial and formal elements to breathe freely within and to communicate to us something of their own unique life.”

LIP: It seems as though you have endless opportunity to create images out of the subject matter you’ve chosen.

KRYSTINA: Yes, but no more than if the subject were ‘fences’ or ‘boundaries’. Ambiguity in perception and interpretation fascinates me and I expect it will do so for some time to come.

My approach to shooting is that of a gatherer rather than a hunter, in many ways akin to the way photographers of the past tended to work, photographers such as Dorothea Lange. Although working to document social conditions, she preferred not to plan what she would shoot:

“To know ahead of time what you are looking for means you’re then only photographing your own preconceptions, which is very limiting.”

I used that quote in the introduction of my book Urban Parallels, it has become my mantra. Having said that, I do like to work to projects, mainly because it helps me decide where to roam, but I’m always expecting serendipitous and chance encounters to happen. Whether the resulting images fit into any of my ‘boxes’ is left to a much later stage.

LIP: What do you consider your ideal shooting conditions?

KRYSTINA: As any photographer knows, the quality of light determines the kind of image you will get. Late afternoon light and long shadows are always seductive, but because I am after capturing different moods I do also like to shoot under less ideal conditions, even in the rain, if it suits that particular subject.

Sites and places that are fairly empty of people and uncluttered by cars are ideal for me, unless the car surfaces themselves are the focus of my attention as has recently been the case. 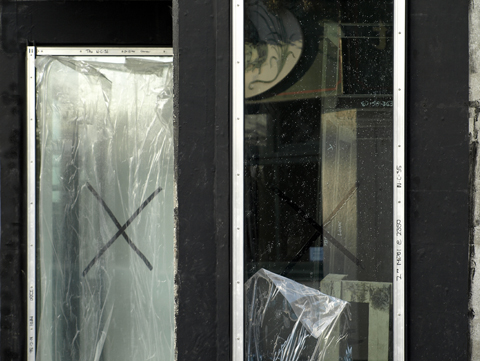 LIP: So what sort of locations attract you most? You must spend a lot of time wandering and looking for details.

KRYSTINA: Indeed I do. The type of photography I do doesn’t really depend on specific locations. The photographs may happen anywhere – it is the presence of man-made materials and structures, such as glass, metal, walls, and signs of use and abuse that is important to me. Hence locations in transition have proven to be particularly fertile gathering grounds – work sites such as places undergoing refurbishment, industrial parks, building sites and small workshops which are often found hidden away in back alleys. Here the new rubs up against the old, structures and materials have a history, they bear the traces of human activity, of time, weather or erosion and organic matter. All of this results in rich visual layers and complexities that act like magnets to my eyes. 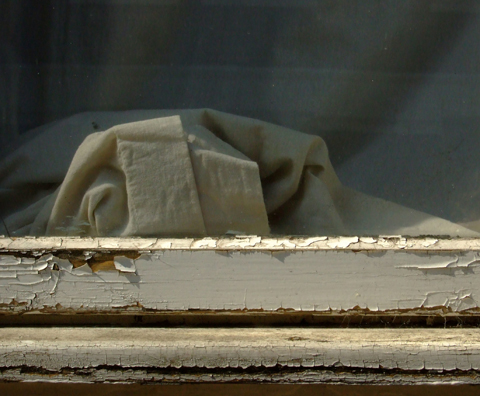 LIP: I know you are experimenting with a return to using film, but what has your experience been like shooting digitally?

KRYSTINA: After acquiring my first digital camera over three years ago, after having been starved of any creative outlet for over a decade I went a bit wild, shooting well over 100 images a day at least five days a week. At some point though, I stopped. The world was flooded with images, why add to the flood? Looking back over my work I tried to analyse and make sense of what I had produced; which images stood out from the rest. As part of this process, I found it useful to put together a book using a self-publishing platform.

My current photographic output is by comparison considerably reduced. I still shoot a fair amount of images I subsequently judge to be mediocre, but fewer of those, I believe. Part of the attraction of trying out medium format film is that it will slow me down even further. I like the idea of having to be more deliberate and to sweat a little before achieving results.

LIP: On the editing of your work – What qualities do you think make great photographs rise above the mediocre ones?

KRYSTINA: The image should communicate something beyond the actual objects depicted within it, something ‘other’. What that ‘other’ is precisely, I do not know, except perhaps that it has something to do with how I, or my subconscious, responds to the body language of the materials and spaces involved. Ultimately, It is the degree to which that body language touches me and stirs my senses and imagination that becomes the deciding factor, although even this may change on repeated viewing. The image needs to be memorable and stand the test of time. Of course, it may not be so to anyone else. I have to take that risk. 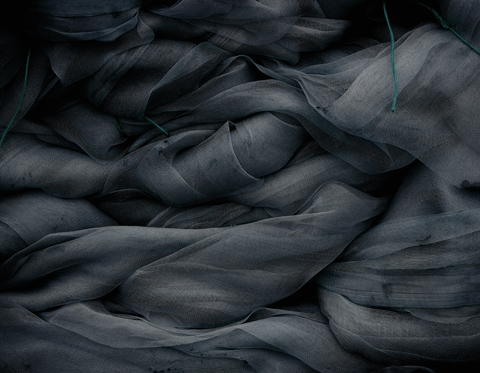 LIP: What do you think there is to gain by making a book of your work?

KRYSTINA: The development of affordable on-line publishing offers great opportunities for putting together cohesive selections of one’s work in print. One can hold a book in the hand again and again, carry it around and share it with others – not only with people one meets, but with anyone in the world interested enough to view or buy it.

The book helped me evaluate my output of the past two years. It was interesting to see to what extent different subject matter and forms could relate across the double pages and through the sequencing and to find new associations and connections emerge. It was an altogether useful exercise and one that I enjoyed. 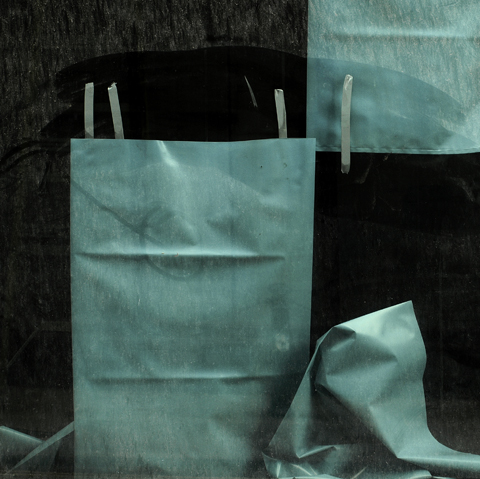 LIP: Do you feel these images communicate something about your personality?

KRYSTINA: All photographs tell us something about the person behind the lens. Each photograph, even a snapshot, has been wilfully created by someone making a conscious or subconscious selection.

Photojournalists and documentary photographers try to chase the ‘real’ by narrowing their focus on actions that can be seen. Or, they select frames that they judge will tell a story they feel needs to be told. Images are intended to function as a wider window on a particular group of individuals, a community or location. That leaves out a lot of reality even without considering other dimensions such as smell, sound and touch.

Artists on the other hand often subvert, manipulate or stage photographs using them deliberately for the purpose of expressing themselves or particular concepts and ideas they may have.

For my part, reality as I find it and the metamorphosis the photographic process enables me to achieve seems engrossing and rewarding enough. I am more than content to work on the fringes and in between these two fields – neither simply documenting nor unduly manipulating – a vast area that gets rather scant coverage and attention. 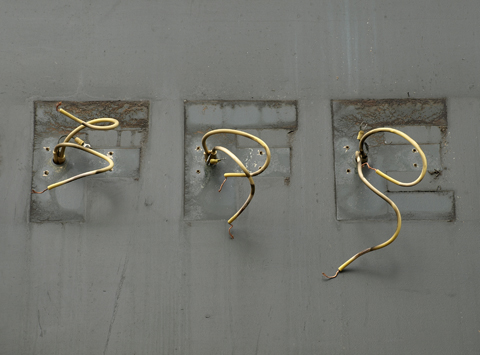 LIP: What photographers’ work have you been admiring, or inspired by lately?

KRYSTINA: I am curious enough to see a wide range of contemporary photography in galleries, books and online. Many works may stimulate my mind, but rarely do they touch all my senses, for that I usually turn back to favourite master photographers, such as Aaron Siskind, Minor White, Josef Koudelka, Raymond Moore. I particularly feel drawn to that unique and single-minded vision of Mario Giacomelli who did everything to his negatives one wasn’t supposed to do. I have a book of his black and white aerial photographs that I always keep by my bedside. It contains stunning abstractions of man’s imprint on the landscape. Some of the colour works of Richard Misrach derive from a similar preoccupation, but with far more ethereal and delicate results. I find his works rather beautiful, despite or rather because of their more serious undercurrents.

Inevitably, given a degree of shared concerns, Sabine Hornig and Uta Barth’s works continue to be of great interest to me. I am also rather impressed by the way they display their works within the gallery space, and in Hornig’s case how she extends her photographs into installation pieces. Although installation work is my background, I do not feel the urge to emulate her, at least not so far.