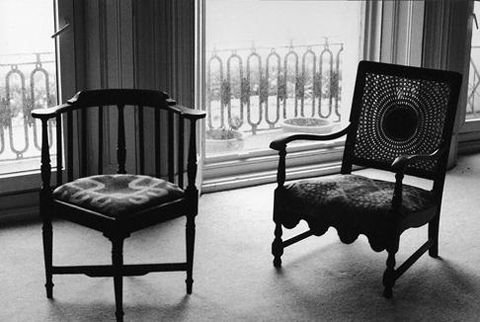 Valentina Lari is an Italian born artist who works with mixed media, using film and still photography she explores the ideas of loss, death and childhood. Some of her work is born from a collaboration with musicians and authors. Her latest photographic project Reveries captures dreamlike landscapes and musings. The use of shadow creates strong moody compositions that seem to capture the moment just after a person has left the frame. Along with the photographer we the viewers become voyeurs of these empty scenes that seem to radiate with presence of some unseen being. The stillness of the space gives us the sense that the photograph has captured a fragment in time that we can enjoy lingering over.

LIP: What was your inspiration for the project Reveries and do you feel this could be a lifelong project or one with a definite end in sight?

Valentina: Yes I can see Reveries being a lifelong project. It was born from my own personal need to portray everyday life situations and locations as part of a dream sequence. I don’t spend days looking for the next possible shot. Somehow every time I am out with my camera I seem to be lucky enough to catch something that for me is magical – even a creature like a toad or a bird under a particular light or in certain circumstances can be part of this of dreamlike stream of consciousness. I love rooms that have been just emptied or objects that are strictly related to the body and our senses – mirrors, furniture and clothes, they just stand alone as if waiting to being used or moved to a different position. I love empty chairs for example – somehow they seem to represent the essence of a human body. Outdoors can be also extremely haunting and intimate, as if we are actually spectators of someone else’s dream and space: abandoned houses, empty lakes, swimming pools and deserted wastelands. 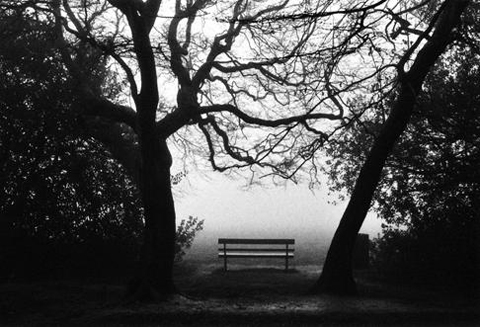 LIP: What is the central theme to this project?

Valentina: Ghost and dreams. And the memory they leave behind.

LIP: Your use of shadow as a strong compositional tool creates a sense of heightened atmosphere – do you think your technique would be as effective or translate as well if you shot digitally?

Valentina: My relationship with digital is terrible. I have taken shots with a digital camera in the past and enjoyed it. It’s fun but that’s all it is for me. It is like having a toy in my hands that makes a silly tune every time I press the button. No matter how sophisticated a digital camera is, I feel there is something lacking. I love every single sound that my old analogue camera makes.

With digital you find yourself checking every image and deleting ones you feel haven’t turned out right – I find this tedious and boring, as it somehow destroys the magic of capturing what it is in front of the lenses and the light that can change in a moment. When shooting film there is a feeling that the image may not come out exactly as you imagined, in fact it may not come out at all, but therein lies the challenge, the beauty of dealing with the unknown.

Generally, I don’t like working on commercial projects, but it is here where I think digital has so much value. Its affordability and instant access to the image, allows the commercial photographer to perfect the elements of the picture. Despite this I don’t feel my images would benefit from being shot digitally. This could be because I am not interested in the digital format or exploring its maximum potential. I love printing in the darkroom and my manipulation is controlled with hand movements and the opening and closing of the enlarger lens. The light is real and tangible – not virtual. Photoshop is an amazing and useful software but it simply doesn’t satisfy my creative pulse when working on my personal projects. 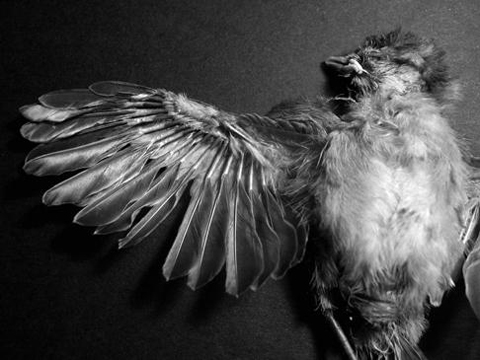 LIP: What or whom would you say has had the greatest influence on how you convey your ideas and approach to photography?

Valentina: My father is an amazing comic artist and illustrator and he has always been interested in images, from figurative art and cinema to photography. He gave me his old enlarger and taught me the basics of using it. He found photography an interesting medium but eventually he returned to painting and drawing. His approach to arts is traditional and in a way “old fashion” in the sense that he comes from a generation where to be an artist you had to be skilled. You had to be able to paint to be a painter, be able to know the light and the language to be a filmmaker and so on. I have the same approach; I still get frustrated when I see artists who are just businessmen/women and don’t have anything to say or truly comment on with their art. I have been brought up with the notion that art is honesty and expression of who you are and of what you want to say, even if no one wants to listen to it. I believe in hard work and real skills.

In terms of personal inspiration I have to admit that I am pretty ignorant regarding photographers. I never studied art or photography, I am self-taught and sometimes I find myself checking famous names in the field that I’ve never heard of! But over the past 15 years these are some of the photographers I have grown to admire: Sally Mann, Joel-Peter Witkin, Diane Arbus, Toni Frissell, Francesca Woodman, Giorgia Fiorio, Robert Mapplethorpe, Ian Saudek, are among those I feel a strong connection with. A couple of days ago I discovered that Mario Giacomelli also had a series of photos inspired by Cesare Pavese’s poem Verra’ la Morte e avra’ I tuoi occhi (Death Will Come and Will Have Your Eyes). The topic I chose for my series is different but I was quite shocked! I have taken some photos of my dying grandmother that remind of this study of a hospice during the sixties. It truly moved me. 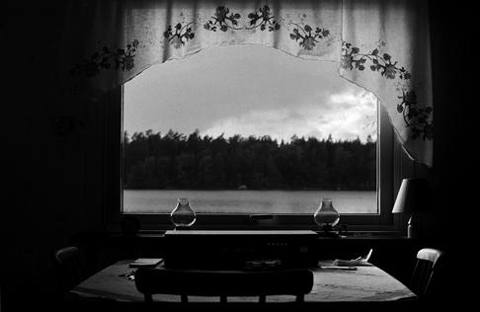 LIP: You have collaborated with musicians and authors on other projects – how important are these other forms of art in influencing and evolving your work?

Valentina: I am restless. I‘ve struggled most of my life searching for the right artistic language to express what screams inside me. There is always a pain, and a joy to talk about. The difficulty is to find the right and honest way for you to express it. I started as an illustrator and I really wanted that to become my job and art but I felt I wasn’t good enough for my own standards. It was painful to try to translate the images from my head onto paper. It still is. I recently went back to illustration and I have been lucky, with some people liking my work and subsequently I have managed to put together some exhibitions that have resulted in some of my material being published here and there. The Kiss Hoarder for example, was collaboration with a novelist, Lana Citron who wrote a piece that was very suitable for the kind of dark, moody style that I use. And yes, I constantly work with musicians, I love taking photos of them, I think it’s incredibly beautiful to catch a blinking eye, a jump or a smile during a performance. Music is the supreme art anyway!

I am mainly a filmmaker; I studied film almost all my life. I came to London to make films. I have done some short films and currently still working on scripts. But I have moved away from this for various reasons and I now work on a more experimental and insular level. To finance a feature film is very hard in an industry that has become so profit driven. There is a small circle of very talented independent directors that are still working, but it’ s getting harder and they are the last generation that consider the medium of cinema as art and see the potential of a story not just from an economical point of view. 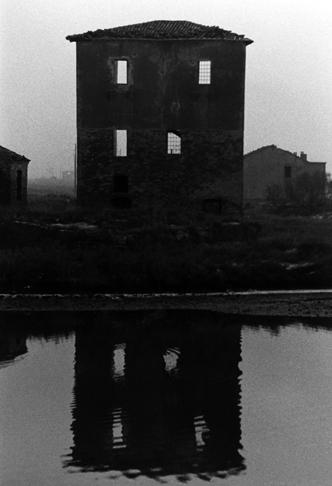 I am ever so grateful to many writers, film directors, musicians and painters. Their work changed my perspective on life and death. Gifted human beings that are not afraid of being controversial, explorative without being exploitative or pointlessly arrogant. People who come to mind: Luis Bunuel, Maya Deren, Ingmar Bergman, Truman Capote, Glynne Cicada, Andrei Tarkovsky, Egon Schiele, Gottfried Helnwein, Francis Bacon, The Quay Brothers, Antonin Artaud, Diamanda Galas, Cesare Pavese. These people are not merely driven to make profits but rather they see the value that a story can bring to the lives of the people who watch it unfold on film.

LIP: Do you think your birthplace has influenced your photography and if so how?

Valentina: You can’t sever your roots and my country has deeply influenced my photography. The shapes of landscape, the buildings, and the light are so different in Italy and your eye, no matter where you are, seeks what it used to. I come from Florence and we had some of the most poetic artists I’ve ever come across. Botticelli for instance – his composition and light are so delicate, the balance between all the elements is so fragile you feel it could break by just looking at it. So unconsciously, I think you end up recreating a certain mood or looking for a certain light regardless of the circumstances or the subject. Although I don’t feel in tune with general attitude towards life and arts that I find in Italy nowadays, I do miss the beauty of our towns and landscapes. But moreover I miss a deep raw dark side of my country that is unknown to most people. There is a pulsing vein that runs across the countryside and the seaside and it carries a tradition of dialects, superstitions, lullabies, passion, monsters and rituals that have shaped my childhood and any artistic urge I have. It’s a maladie and I feel this can be found in my Reveries project. 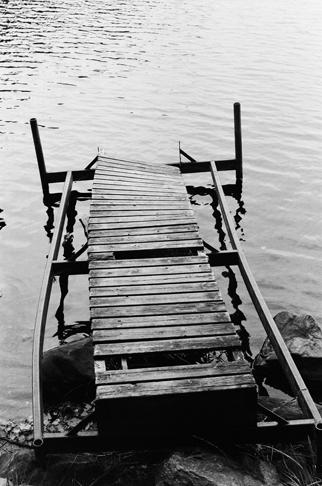 LIP: Do you ever shoot colour and what is your B&W film of choice?

Valentina: I use different films as I like to experiment, but I do find the Fujiifilm Neopan 400 very versatile and reliable. Very nice fine grain too. I do shoot in colour, but not very often. It doesn’t seem to translate my feelings and the sense of melancholy that I want to create. I want to freeze time in my images and I think colour photography sometime gives too much information. Despite this I am actually starting a project in colour, inspired by medicine, witchcraft and painting. But I continue to take some black and white shots at the same time just to be on the safe side! 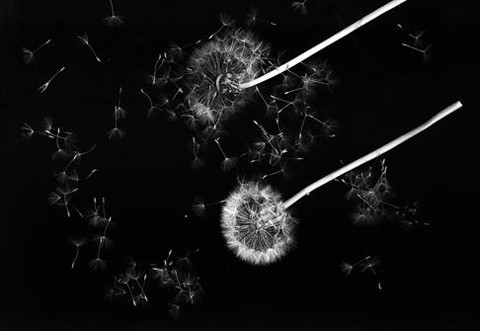 LIP: What are your future plans – exhibitions? New projects?

Valentina: I am currently working on a visual project in collaboration with the Mutter Museum, a famous pathological collection in Philadelphia. It’s an experimental film as well as a series of photos for a future exhibition there, and possibly in London. I am also very interested in art and medicine as I feel that combining the two provides a perfect opportunity to push some boundaries. I am always happy to work on new photographic exhibitions and projects, it make me feel that all the images that I accumulate year after year make sense of life to me and possibly to my audience.