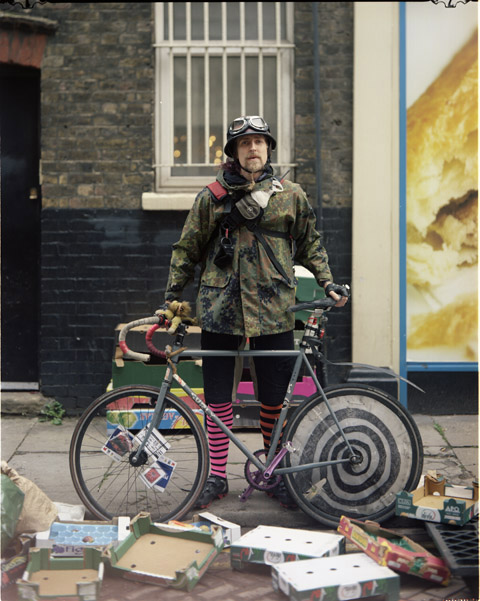 In 2009 Daniel Bosworth started photographing London Cyclists for the bi-monthly magazine of the London Cycling Campaign, with four of his portrait images featured in the back of each issue. His idea was to create an ongoing archive of the growing number of cyclists in London. The portraits are shot with a 5×4 field camera and for each image Daniel measures out distance to subject, “to create a democracy, with the bicycle being a kind of leveller.”

Daniel graduated with first class honours in Photography at Wolverhampton School of Art and Design, and currently works in London on commissions and self-initiated projects. An exhibition of London Cyclists runs through March 2011 at look mum no hands! Daniel answered a few questions about his project. 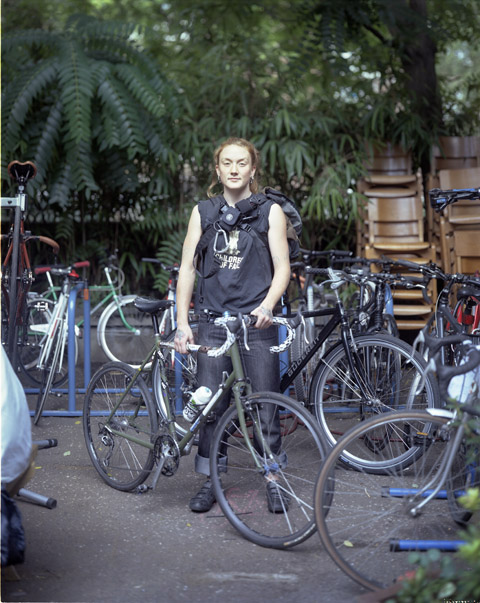 LIP: What first attracted you to photographing London cyclists?

Daniel: I was doing some bits and pieces for the London Cyclist Magazine and suggested the idea to the editor and he liked it.

LIP: Are you a cyclist yourself? Do you have any opinions about London’s provisions for cycling?

Daniel: I’ve got a bike, it’s a patched up collection of vintage parts, recycled bmx and ebay purchases. Makes the editor cringe every time he sees it. I mainly use it for riding my daughter around the park and visiting friends. Working from home, I don’t do much commuting. I don’t really notice the provisions for cyclists as I’m out in Greenwich, but I guess any efforts to improve road safety has to be a positive. 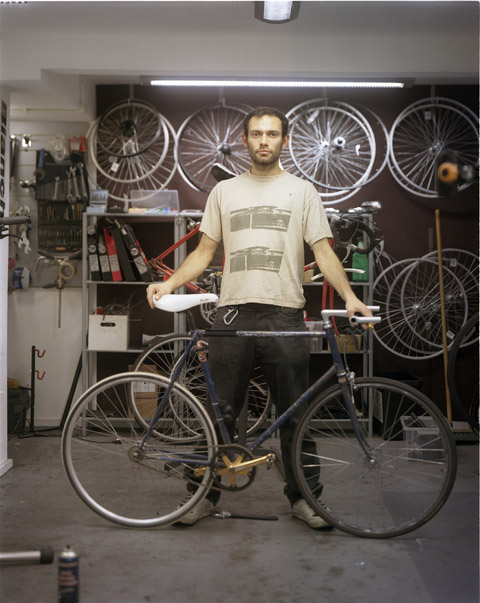 LIP: Do you have a method for finding new subjects to photograph?

Daniel: I started off googling and e-mailing. It’s hard to get things going because you haven’t got anything to show people. With e-mails you can consider how you ask carefully and attach other things you’ve done that are relevant. Once I’d got things moving I’d go to bike shops and cafes and ask people, the London Cycling Campaign would give me some contacts and a few times I stopped people on the street, which can be tricky cause even if you get a positive response you then have to say, ‘Right, I’ll just get my field camera out, won’t be a minute.” 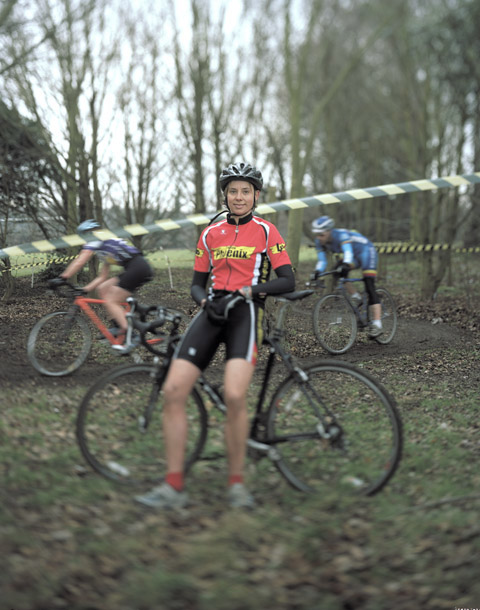 LIP: Why do you think it’s interesting to create a visual archive of London cyclists?

Daniel: I guess I like to gather and order things, to try to make democracies, cyclists fitted that well because they’re such a broad range of people with a commonality pulling them together. 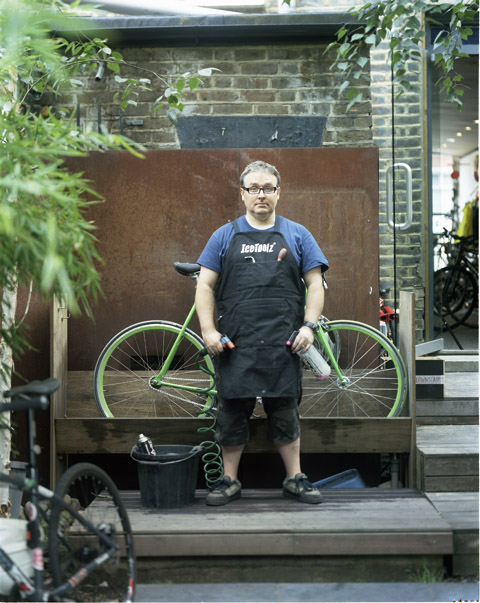 LIP: Logistically is it difficult shooting this project with a 5×4 field camera? And are you processing your own film?

Daniel: Yes, it’s much more difficult than charging around with a 35mm but you gain a lot from using it. You have to stop and work slowly through everything so it keeps you on your toes, and the process seems quite disarming for the subject. By the time you’ve set up, measured out distance and focused under the dark cloth people seem to lose their usual inhibitions. Although working digitally is much more functional it’s a tonic to work with something that doesn’t seem so disposable. I use BDI on Old Street for processing and digital c-types, they’re good at what they do and very easy to work with. 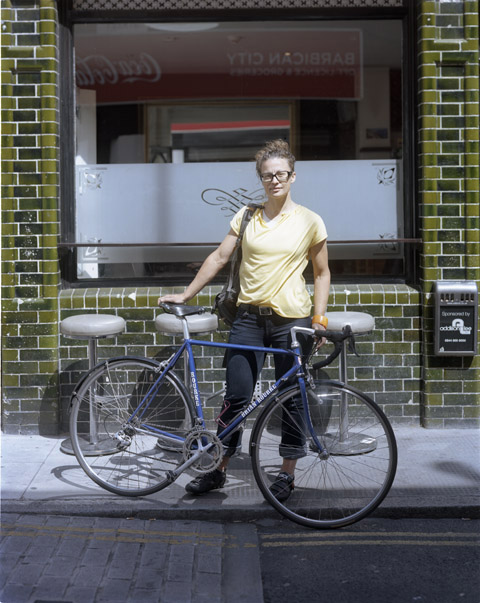 LIP: You are exhibiting some of these portraits at look mum no hands – can you tell us a bit about the space and how your exhibition makes a contribution to London’s cycling community?

Daniel: Look mum no hands is a very busy bike mechanics and cafe at the Clerkenwell end of Old Street. They have bike related exhibitions and launches there. I’m not really sure if the project has made a contribution to the cycling community but I really enjoy doing it. It’ll be good seeing some of them up on a wall. 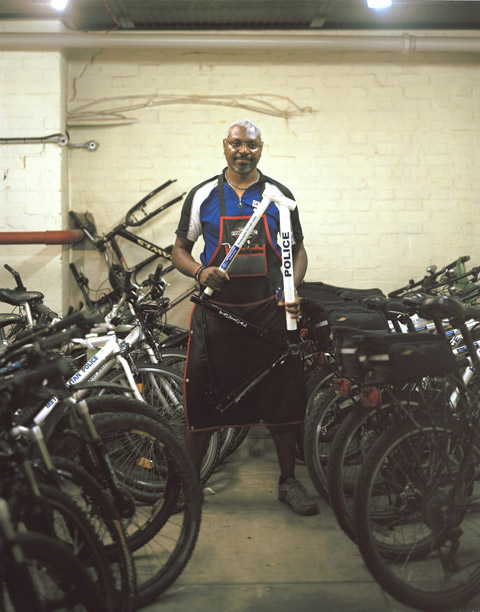 LIP: How long do you plan to continue the project, and do you have other plans for showing the work in future?

Daniel: It would be nice to get up to a hundred (I’ve done 35 so far) but it’s quite a time consuming hobby and I should probably be spending more time making a living. I haven’t got any other plans to show them as yet but obviously I’d like to. 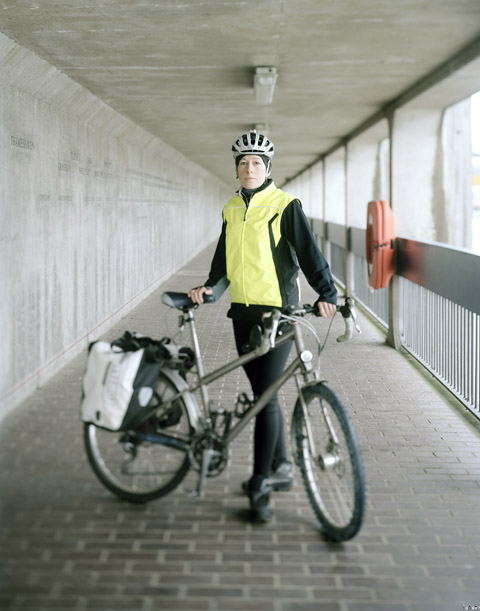