As a fairly new member to LIP, Lynne Collins has been keeping busy working on some interesting bodies of work. For this showcase she shares one of her more recent projects with us. The Trespasser is a series inspired by the 17th Century Dutch masters. Having been amazed by the still life paintings of the 17th century, Lynne set out to re-create these scenes and photograph them. Her aim was to create images that looked more like paintings than photographs. These compositions bring together images of decaying interiors shot in abandoned mental asylums and studio shot still life scenes. 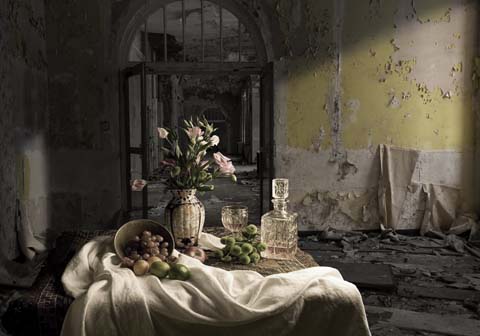 The Trespasser 1 (above) was shown at Photo-Open Extra at Rich Mix for last year’s Photomonth. Of this image Tom Jeffrey wrote that Lynne’s image “sets up an opposition between the aspirations of traditional painting on the one hand, and the ‘authenticity’ of photography on the other. That these two styles co-exist within the same (photographic) image suggests perhaps the superiority of photography as a medium, or rather its all-conquering versatility.”

“He made me feel I had achieved my goal,” Lynne says.

As a child Lynne spent much of her time on film sets, with both of her parents being involved in the film and television industry. This provided her with an unconventional upbringing and education, and ultimately laid the foundation for the way she works as an artist, film maker and photographer today.

“I feel that I have been an artist since the age of about 11. I did not go to art college through choice. Being a very rebellious child, institutions were not my thing. From the beginning of my life I was lucky to be surrounded by interesting people, actors, film directors, designers, artists, stage and circus people. My learning came from those amazing characters and it was a very natural process. The kind that works best for me. After leaving school at the age of 17 I worked for a short time in a photographic laboratory. Here I learnt the basics of processing film (no digital cameras in those days), retouching images by hand and colour grading for the final print. At the time I was not really interested in the medium as a career, painting and sculpture was more my thing.”

For 25 years Lynne freelanced as an artist and sculptor in the film and television industry, working on commissions for feature films and BBC art programs. During this period she gained knowledge of film making and photography from industry experts and began to develop a real interest in the photographic medium as another artistic tool. On leaving the film industry she went to college to learn web design but found the teaching too slow and uninspiring so she decided to teach herself all things digital and internet-based. 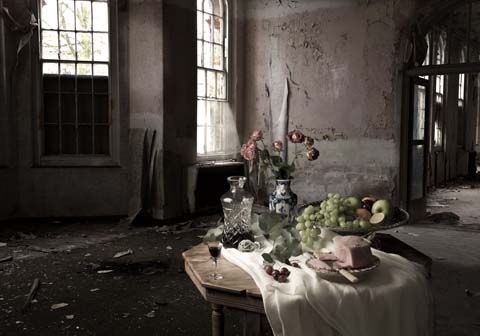 LIP: What inspired you to use abandoned mental hospitals as the location for these images?

Lynne: I had already used abandoned mental hospitals for an earlier series, The Edge of Perception, and knew they would work well with The Trespasser and allow me to convey a narrative that had been bugging me since my first visits. Originally I chose abandoned mental asylums because they had once been quite elegant buildings. The idea had been to put the insane into interiors that were uplifting, unfortunately it didn’t quite work like that. Anyway, I love the atmospheric decay and nature’s ability to turn every nook and cranny into new and wonderful habitats. 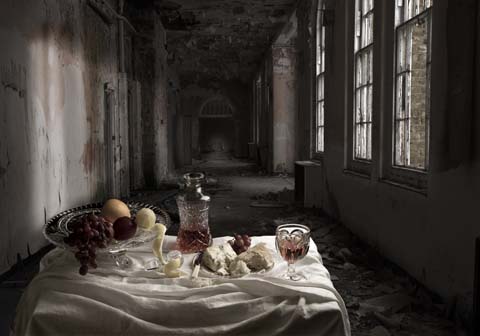 LIP: How do you find your locations and gain access? What difficulties did you experience shooting in these locations?

Lynne: I found the buildings on Google Earth. They were all built to the same architectural designs. The size and shape of them became easy to spot, being as they were, the size of a village. Google earth is great for satellite imagery, it’s even possible to determine the state of the buildings and whether or not they have been abandoned.

Gaining permitted access as far as I could see was going to hold me up. Some of the places I have been in were in an extremely dangerous state of decay. The place that inspired me the most was an asylum called Cane Hill in Coulsdon. It’s gone now, they bulldozed it last year. At first I did try to get permission to go in. I was told the amount of asbestos and structural deterioration was just too dangerous. I was not going to let the high razor wired fences and guards with dog patrols stop me, I knew what I wanted and it was in those buildings. I came back with my partner and a small spade and dug a hole under the fence just big enough to get my head under and slide through on my back. Equipment had to be kept to a minimum, just camera and tripod. There’s very little light in most of the buildings, it’s very creepy. Windows are either boarded up or completely grown over from the inside and out with rambling foliage. I like to use the limited natural light to my own advantage. I like to photograph the dark spaces as much as the light spaces. Dark spaces create mystery.

I made many trips to Cane Hill, though never on my own. A floor or roof collapse would mean you might never be found and no one would ever hear your screams. On one trip some roof beams did fall and partially trap me, luckily I was not alone, the beams were moved and I lived to tell the tale, unhurt, just a little shook up and nervous for a while. 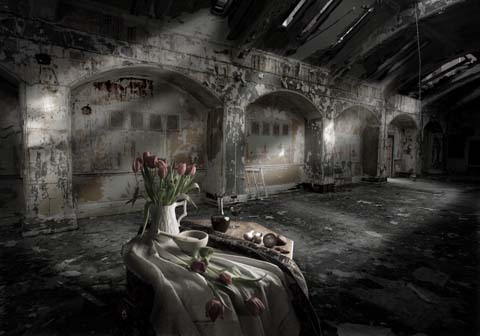 LIP: How did you go about creating the images?

Lynne: The Trespasser is a series of deliberately constructed photographic compositions. The still life was shot in the studio. The harmonising of colours and lighting in each of my images was crucial to reflect the evocative tones of the Dutch paintings. Without controlled studio lighting I would not have achieved that painterly appearance that was, after all, my main objective. All the abandoned building shots had been on a long exposure and the studio shots were no exception. They were shot in a near dark room. I used a black backdrop and modelling light with a soft box to give a gentle Rembrandt type glow of directional light.

LIP: What kit do you work with?

Lynne: I work with a digital camera, the Canon EOS-1 ds Mark 3. Such a fantastic camera, I love it. For this series I used a Canon zoom EF 17-40mm 1:4 lens. I use a Giottos carbon fibre tripod. The lighting equipment is made by Bowens and for the still life studio shot I used a modelling light with a soft box. 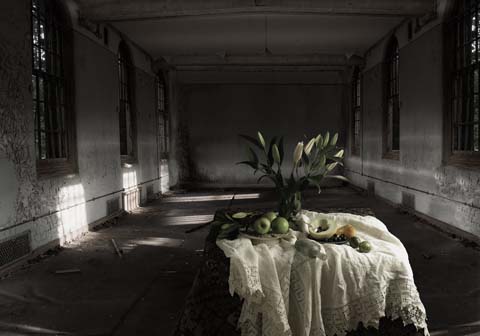 LIP: How long have you been working on the project?

Lynne: I worked on this project for about a year but had spent many months before that traveling round the South East looking at locations and working out how to gain access. I also spent a lot of time researching both the hospitals and the style of paintings I wanted to emulate. The series is not just about 17th century Dutch artists. By bringing two scenes together I am offering a narrative that seeks to offer a commentary on modern life as one of over-consumption and wastefulness.

LIP: How much of the project is created using digital manipulation? And how has the digital revolution influence the way you work and approach your subject?

Lynne: I like my images to be of high quality and very atmospheric right from the start, from that very first click of the shutter, but I use Photoshop like another artist tool, to aid the use of composites and layers. Wow! The digital revolution has opened up my life. I love using Photoshop, not to change the actual images, only to combine them. When I first started to work with Photoshop for web and graphic design it amazed me and my imagination took a leap in yet another direction. Digital cameras are so direct, you can see straight away if you’ve got the image you want and it’s there on the computer, no more waiting for it to go through that whole processing procedure before you know how it’s turned out. The quality I get from my digital camera is fantastic. I like to get my images printed really large. 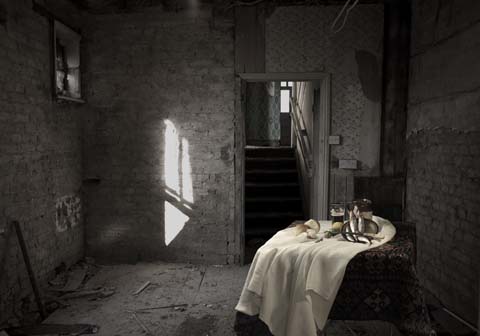 LIP: What or who has been the greatest influence on your photography?

Lynne: I am influenced by everything around me, politics, and the plight of the natural environment, films and drama, the media. I try not to be influenced by other photographers though, as I’m afraid of losing track of my own thoughts and ideas and taking on board those of others.

LIP: What plans do you have for exhibiting the project?

Lynne: I have already had a solo show in a West London gallery where I exhibited both The Trespasser and The Edge of Perception series. The Trespasser images have been shown in the Royal West of England Academy and many London galleries including Rich Mix in Shoreditch, the Spanish Cultural Centre in Belgravia and The Front Room Gallery in Farringdon. The series is also represented by Troika at their gallery in Farringdon and online. by Corin Ashleigh Brown