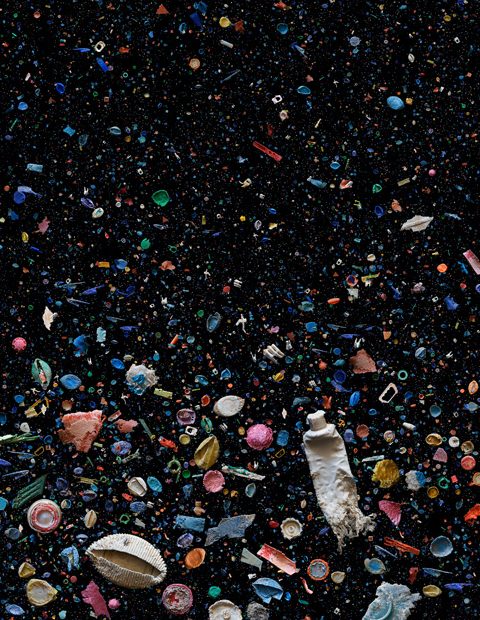 Mandy Barker‘s direction as an artist has evolved from graphic design to photography, having completed a BA in Graphic Design at Northumbria University and later an MA Photography (Distinction) at De Montfort University in 2011. She has exhibited both in the UK and abroad and also takes on private commissions.

For this Showcase we discuss Mandy’s project SOUP, which takes its name from a term describing “plastic debris suspended in the sea, with particular reference to the mass accumulation that exists in an area of the North Pacific Ocean known as the Garbage Patch.” Images in the series follow a narrative sequence that represents the disastrous environmental impact of dispersed plastics on the world’s oceans, and the consequential death of sea life. 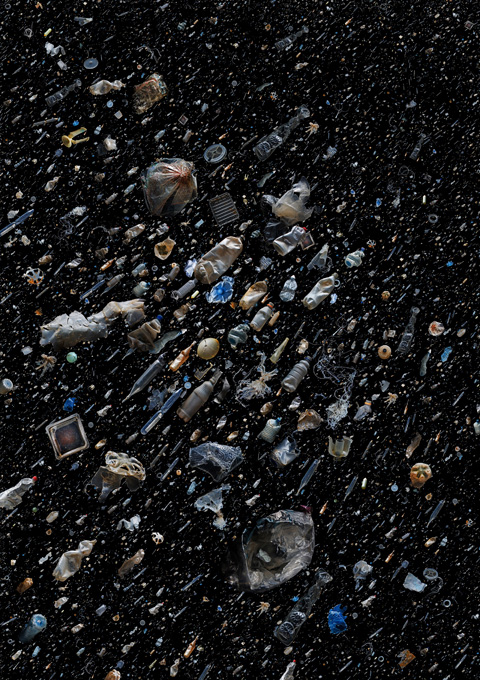 LIP: What initially drew you to investigate the ‘garbage patch’?

Mandy: I was initially shocked by the images taken by Chris Jordan of albatross chick carcasses, the birds having died from ingesting plastics mistaken for food collected from the ‘garbage patch’, their stomachs full of cigarette lighters and bottle tops. Following further research of how plastics affect marine life and ultimately end up in the human food chain was a subject I felt I could not turn away from.

LIP: On first impression these images are strikingly beautiful; saturated rainbow bits of colour organised into decorative ensembles. Clearly this is a construct to deceive the viewer, was that your original intention setting out? Or how did your ideas evolve?

Mandy: The mass accumulation of plastic in the North Pacific gyre is almost impossible to photograph in reality as the plastic exists at differing sizes, from microscopic fibres in a soup-like consistency, (hence the title of the project) up to larger objects that are mostly submerged. It is because of these constraints that the intention for my project was to create a conceptual representation of the garbage patch based on scientific facts provided by organisations and oceanographers mostly based in the US. All the plastics photographed have been salvaged from beaches around the world and represent a global collection of debris that has existed for varying amounts of time in the world’s oceans. For instance the image SOUP:Turtle is composed from the original bath toys that escaped from a container ship in the mid Pacific in 1992, these particular toys were found in 2008 after having existed for 16 years in the North Pacific.

My intention aesthetically was to visually attract the viewer to the image and for them to question what it represented. I felt by enticing the viewer to discover the meaning in this way would create a more lasting impact and message of awareness.

Plastics never decompose but biodegrade into smaller fragments having a detrimental effect on marine life and ultimately ourselves. Awards and exhibitions have enabled my work to be viewed by a wider and global audience, allowing me to reach my aim of raising awareness through visual interpretation. 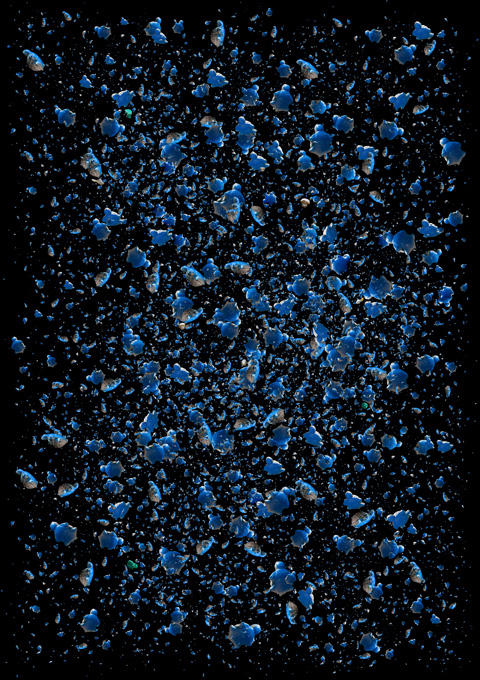 LIP: How does the process of collecting, construction and making the photographs physically play out for you?

Mandy: The plastics have been collected from the east and west coasts of the UK, from Europe, US, and even Alaska. I categorised the plastics by their colour, aesthetic similarities, for example, translucent or pieces that have text printed onto them. The particular area or beach in which the plastics have been found was another concept I used, for example, SOUP:Nurdle was constructed from six layers of nurdles (raw pellets of plastic before manufacture) collected from six different beaches. The intention for this image was to represent the fact that nearly all beaches around the world now have nurdles on them.

Each piece of plastic is photographed on a black background and in a group with other pieces of a similar size. These photographs are combined as layers that depict the smallest up to the largest pieces and combine to create a feeling of depth and suspension in the final image. All the images are created to represent the disturbing statistics of dispersed plastics having  no boundaries.

The sequence of images in SOUP reveal a  narrative that begins with the initial attraction of plastics to sea creatures, their  attempted ingestion, and ending with their ultimate death  represented by SOUP:Ruinous Remembrance. The final image in the series, SOUP:500+ is in contrast to earlier images and portrays the fatal consequence of ingestion, depicting a more compact arrangement by suggesting how the plastics would have existed in close proximity to each other within the stomach. 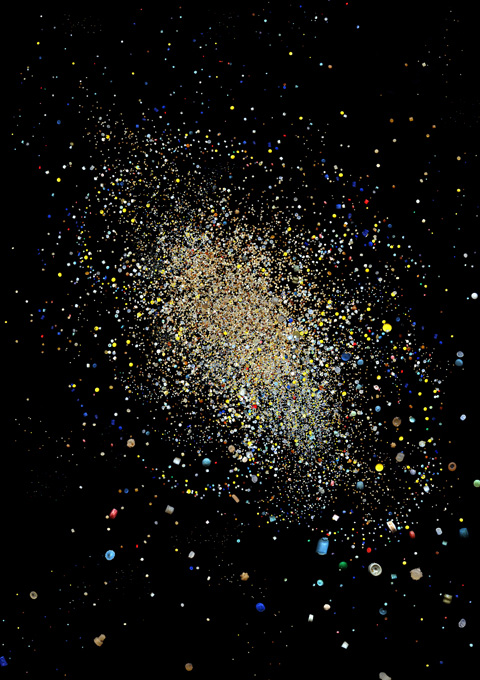 LIP: You created a ‘sketchbook log’ during the process, can you talk about what is in it and how this facilitated your work?

Mandy: My sketchbook log records the journey and concept behind the project showing the development of my ideas and process behind each image in the series. The compositions are inspired by the thoughts and ideas of other artists and photographers, and at the same time are underpinned by facts, a combination that compliments the final result. 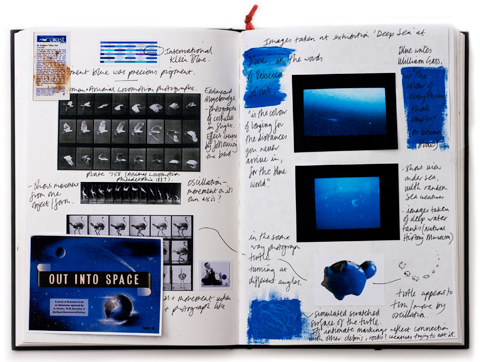 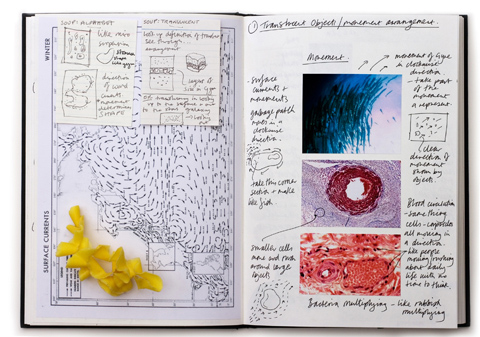 LIP: By introducing a narrative element throughout the series, was this done in particular with your book project in mind, or do you see order and sequence as generally integral factors in your work?

Mandy: The narrative element was loosely planned at the outset but the order did change as other images were created along the way. Producing a book gave me the opportunity to experiment with the order and sequencing of the images, almost as a form of self-curation prior to exhibiting. I do see order and sequencing as a vital part of my work as it creates a storytelling concept and enhances communication.

LIP: How did you envision this project would ultimately be best presented to an audience?

Mandy: The images were created on a large scale and would be presented this way for maximum impact; the smaller objects in the image would then be visible by the audience. It is important that the plastic objects are recognised by the viewer so they can relate to the individual items of what is now presented as plastic debris. To further enhance the overall experience and message the images would be exhibited alongside pages taken from my sketchbook log and presented with selected plastic debris, allowing the viewer to engage at a deeper level. 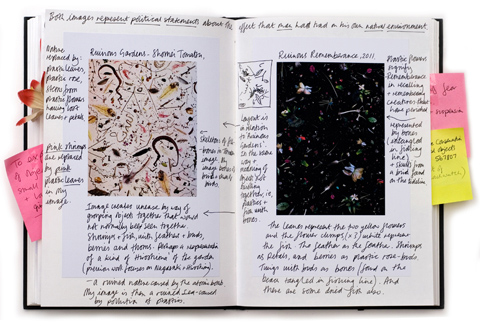 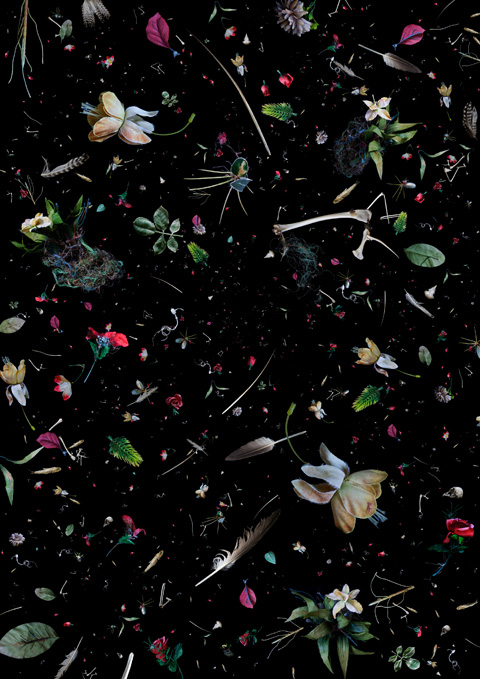 LIP: Has working on SOUP impacted your interests as a photographer?

Mandy: This project has challenged my way of thinking and working as I had not previously been particularly interested in the conceptual approach but because of the reasons already mentioned I felt this was the only way I could represent this environmental problem. So essentially the direction was led by the subject itself and photography was just a way of delivering that message. To be able to visually stimulate interest and at the same time make the viewer think or question what the project is about has fulfilled my aspirations and intention for the work.

My future direction as a photographer will continue the same energy and motivation because I think if you feel something for the subject then this will be reflected in your work and hopefully then be of interest to others.

LIP: Will this project continue in some form, or are you on to something new at the moment?

Mandy: At the moment I am continuing to create additional SOUP images which will be exhibited in my solo exhibition in 2013 but at the same time I am planning a new project for next year that will continue to develop my work with plastic oceanic debris. 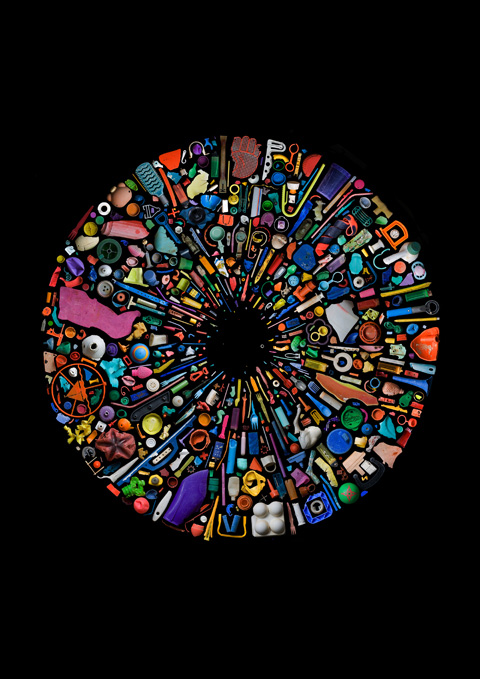